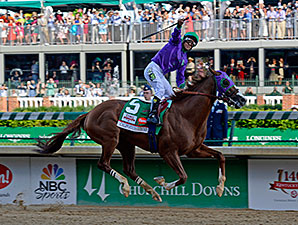 Created by Secretariat’s owner Penny Chenery, the Vox Populi, or “Voice of the People,” Award recognizes the racehorse whose popularity and racing excellence best resounded with the public and gained recognition for the sport during the past year.

Trained by Art Sherman for DAP Stable, the Derby and Preakness Stakes (gr. I) winner built a coast-to-coast fan base of “Chromies” and was the clear favorite among the record number of voters in the Vox Populi online poll, according to Secretariat.com. The total number of votes was not released. The winner was selected on the equally weighted basis of the online poll voting and input from Chenery and the Vox Populi Committee, comprised of individuals from within and outside the racing industry.  Trained by Art Sherman, California Chrome won six of nine starts and earned more than $4 million in 2014.

“This is such an amazing honor and we are so grateful to receive this award from Chenery and the fans,” said Steve Coburn, who co-bred and co-owns the colt with Perry Martin. “We have always said Chrome is the ‘People’s Horse’ and we are thrilled that the public feels the same way we do about him.”

A modestly bred son of the California-based stallion Lucky Pulpit, California Chrome was produced from the Not for Love mare Love the Chase. Coburn and Martin purchased the mare for $8,000, leading to them being called “Dumb Ass Partners” by another horseman, thus the name of their stable.

“Everyone loves a Cinderella story, and this one was no exception,” said Chenery. “California Chrome, a proven champion and formidable competitor, reminded us that it doesn’t matter from whence we came but rather how we dance when we get to the ball. Furthermore, his inspiring story and engaging popularity reached beyond the racetrack stands and into the conversation of a nation. I am looking forward to seeing California Chrome build upon his success during his 4-year-old season.”

Chenery’s designees will present the custom-made Vox Populi trophy to California Chrome’s connections Jan. 10 at Santa Anita Park. The California Chrome team is scheduled to be at the presentation and to sign autographs beginning at 11 a.m. PST. The ceremony will be broadcast live on HRTV. In conjunction with the award, DAP is donating the silks worn by California Chrome in winning the San Felipe Stakes (gr. II) for auction with proceeds to benefit the Secretariat Foundation and other equine charities.

This year’s Vox Populi winner was one of a group of nominees submitted by the Vox Populi committee and Penny Chenery.

This year’s other nominees (in alphabetical order) were: veteran East Coast campaigner Ben’s Cat, who posted his fourth consecutive win in the Mister Diz Stakes; Game On Dude, the West Coast gelding who set a stakes record while becoming the first horse to win the Santa Anita Handicap (gr. I) three times; Shared Belief, the 2013 champion 2-year-old male who sustained his first career loss in his troubled trip in the Breeders’ Cup Classic (gr. I); Untapable, the filly who won the Longines Kentucky Oaks and Longines Breeders’ Cup Distaff, both grade I; and Wise Dan, who won three grade I stakes and one grade II in four starts despite undergoing colic surgery.