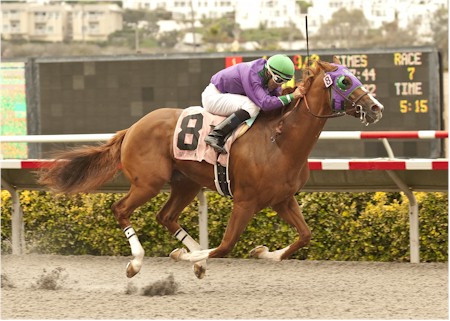 California Chrome is by Lucky Pulpit, out of the Not For Love mare Love the Chase, was bred by owners Perry Martin & Steve Coburn and is trained by Art Sherman.

He has two wins in four starts, earnings of $100,600 and was coming off a fifth in the June 15 Willard Proctor.

“He was a little bit green (when fifth in the Willard Proctor Memorial last out),” said Sherman. “I could see him ducking in and out, so I put blinkers on him. Alberto (Delgado) knows him so well and you could see today that he was all business. We might run him in the ($300,000) Futurity (Sept. 4) and see what happens. I think the farther he goes the better.”

It was the first win at Del Mar for Delgado.

“To do it in a hundred grander is very special. I’m pumped,” he said. “This is a nice colt and I’m tickled I got to ride him again. I broke his maiden (May 17 at Betfair Hollywood Park) and the next day I broke my ankle. When he came back and ran last time (a fifth-place finish in Willard Proctor Memorial at Betfair Hollywood Park on June 15), I couldn’t ride and I was sick about it. But they put me back on today and I’m just delighted. He’s a nice colt and he’s going to get better.”

California Chrome ran the 5 ½ furlongs in 1:03.48 and won by 2 ¾ lengths at odds of 6-1. Moving Desert (Desert Code) was second and Gangnam Guy third in the field of seven.