By Jay Privman DRF.com
BALTIMORE – Back when he was a mere stable hand connected to Swaps, young Art Sherman went to the Kentucky Derby, then went right back to California with Swaps, the Derby winner, in tow. The Triple Crown wasn’t even considered by Swaps’s owner and breeder, Rex Ellsworth, or trainer, Mesh Tenney.

Before a record Preakness crowd of 123,469, California Chrome ($3), the favorite, scored a 1 1/2-length victory in the Preakness, which marked his sixth straight win and gave him a chance to become the sport’s 12th Triple Crown winner. In the years since Affirmed won it, 12 horses prior to California Chrome had won the Derby and Preakness. Eleven of them failed to win the Belmont, and the most recent, I’ll Have Another, failed to even make the race.

“I’m never crazy about running back in two weeks,” Sherman said, referring to the Preakness. “Now there’s three weeks. It’ll be quite a challenge. You’ve got to have a very good horse. I’m hoping I have one.”

Sherman has been honest in his assessment of California Chrome all along. He defers when asked to compare him with Swaps, noting that Swaps at one time held six world records. His truthfulness was on display in another manner this week, when he and his son and assistant, Alan, revealed that California Chrome had a scratchy throat and said it was nothing to worry about, which proved correct. That Art Sherman is starting to warm up to potential success in the Triple Crown is not the idle rambling of a neophyte.

“We’re running on a high right now, but when we get to Belmont, I think he’ll run big ─ I really do,” Sherman said.

The Preakness required far more effort from both California Chrome and jockey Victor Espinoza than did the Derby. Espinoza had to ride California Chrome away from the gate to get off the inside and secure a good position, then Espinoza was forced to move with a half-mile to go when Social Inclusion launched his bid.

California Chrome turned back Social Inclusion, then had to stave off a fresh challenge from Ride On Curlin. He handled it all, covering 1 3/16 miles in 1:54.84.

Social Inclusion finished another 6 1/2 lengths behind Ride On Curlin in third, eight lengths behind California Chrome. General a Rod was fourth and was followed by Ring Weekend, Pablo Del Monte, Dynamic Impact, Kid Cruz, Bayern, and the filly Ria Antonia.

General a Rod was a tough-luck fourth. He was caught behind Ria Antonia when she stopped entering the far turn, was shuffled back, then re-rallied. The performances of California Chrome, Ride On Curlin, and General a Rod – the only three horses in this 10-horse field who exited the Derby – certainly underscored the quality of the Derby.

California Chrome started from post 3. Although he was rocking in the gate, as is his habit, he broke sharply, with only Pablo Del Monte quicker. Espinoza got him outside of Pablo Del Monte in the first furlong, then settled into third when Ria Antonia moved early to go with Pablo Del Monte through fractions of 23.56 seconds for the opening quarter-mile and 46.85 for a half-mile.

California Chrome was in a perfect striking position the entire way down the backstretch. But nearing the far turn, jockey Luis Contreras sent Social Inclusion after the leaders.

“They attacked too soon. I thought, ‘This is crazy,’ ” said Espinoza, who said he got “more tired mentally than physically” riding this race because of all the tactical decisions required.

California Chrome left Social Inclusion at the top of the stretch and – as he did in the Derby – quickly opened a daylight lead on his rivals in upper stretch. Ride On Curlin, ninth for the first half-mile, made a bold run, but California Chrome always held him safe and never let him get by on the gallop-out.

“I knew he’d have to run harder in this race,” Sherman said. “Coming back in two weeks was a little bit of a concern. He’s a real racehorse. I’m hoping the mile and a half is up his alley. After watching him today, I think he can go the mile and a half. He can rate, and a speed horse who can rate is always dangerous.”

California Chrome, bred and owned by Steve Coburn and Perry Martin, has won eight times in 12 starts. In the Preakness, he earned $900,000 from a total purse of $1.5 million, bringing his career earnings to more than $3.4 million.

“I don’t mean to be bold or cocky or arrogant, but when this horse was a day old, I knew he’d do something big,” Coburn said.

Sherman has been on the racetrack all his adult life. After working for Tenney and Ellsworth, he was a jockey for 23 years and then turned to training. When the Triple Crown quest was mentioned Saturday, he grew wistful.

“For my career, been in the game 60 years, a Triple Crown winner? Wow,” Sherman said. “If you’d have said that at the beginning of the year, I’d have said you were crazy. It’s a dream for any trainer to do this, believe me. 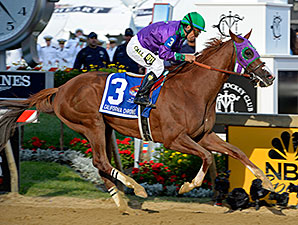 With wins in the Preakness and Kentucky Derby Presented by Yum! Brands (gr. I), California Chrome will head to New York for the Belmont Stakes (gr. I) June 7 and a chance to become the first Triple Crown winner since 1978.

With Victor Espinoza riding for trainer Art Sherman, California Chrome got a trip similar to that in the Kentucky Derby; he rated just off the early leaders, bid on the far turn, made the top and drew away to victory. At the finish the Lucky Pulpit colt had 1 1/2 lengths on fast-closing Ride On Curlin, who was 6 1/2 lengths ahead of third-place finisher Social Inclusion. General a Rod was fourth.

“It’s an awesome feeling,” said Espinoza, who in 2002 won the first two legs of the Triple Crown with War Emblem but lost the Belmont . “It was a crazy race. I got more tired mentally than physically. It worked out well and he’s an amazing horse. I saw a horse go to the front and I said, ‘I’ll sit behind him.’ Then I saw another one come, and I had to use my breaks. But as soon as the other horse got clear of me, it worked out perfectly.”

“It’s quite a thrill,” Sherman said. “I knew we had to run harder to win this race. He’s a real racehorse, and I hope a mile and a half is up his alley, too.”

California Chrome was bred in California by his owners. He is the first California-bred to win the Preakness since Snow Chief in 1986.

BALTIMORE – California Chrome kept hope alive for the first Triple Crown in 36 years when running to victory Saturday in the 139th running of the Grade 1, $1.5 million Preakness Stakes at Pimlico in Baltimore.

Ridden by Victor Espinoza, California returned $3 to win after finishing the 1 3/16-mile distance in 1:54.84 over a fast track. Ride On Curlin finished second, 1 1/2 lengths behind the winner.

Social Inclusion, who launched a bold move to challenge California Chrome at the quarter pole, faded steadily down the stretch to finish third, 6 1/2 lengths behind Ride On Curlin and just a head before General a Rod.

California Chrome, the winner of the May 3 Kentucky Derby and the huge favorite in a field of 10 3-year-olds, now goes for the Triple Crown in the June 7 Belmont Stakes in New York. The California-bred colt won for the sixth straight time.

“Thank you from the bottom of my heart,” a weeping Coburn said while speaking on the winner’s pagoda on the NBC Sports telecast.

Down the stretch, Espinoza put his mount to the drive, and he pulled away. Only Ride On Curlin, a 10-1 shot under Joel Rosario who was second-to-last for much of the trip, had any chance late, but California Chrome rolled home safely for his sixth straight stakes victory and eighth win from 12 career starts.

“It’s an awesome feeling to have a horse like California Chrome,” Espinoza said. “It was a crazy race. I got more tired mentally than physically. It worked out well, and he’s an amazing horse. I saw a horse got to the front, and I said, ‘I’ll sit behind him.’ ”

Of those defeated, perhaps General a Rod, a 20-1 shot, had the toughest trip, as he had to check sharply behind the badly tiring filly Ria Antonia on the far turn before re-rallying to just miss finishing third. Ria Antonia wound up last.

A number of non-Preakness runners will be waiting for California Chrome in New York, including Commanding Curve, Commissioner, Danza, Intense Holiday, Samraat, Tonalist, and Wicked Strong.