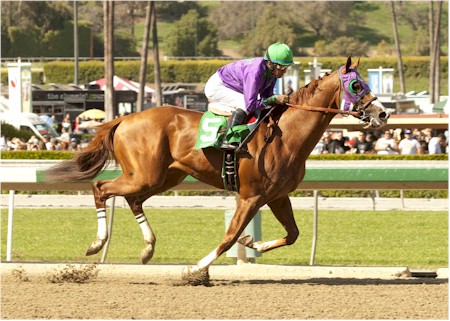 Kept under a tight hold by Victor Espinoza while stalking pacesetter Dublin Up in the 1 1/8-mile Santa Anita Derby, California Chrome was let loose rounding the final bend and quickly established command en route to another open-lengths victory. Espinoza had his imposing mount geared down the final sixteenth, no doubt thinking about the next test for this improbable colt—but the winning time of 1:47.52 over a fast Santa Anita Park main track was superb anyway.

Rebel Stakes (gr. II) winner Hoppertunity was the distant second-place finisher, while Candy Boy, the Robert B. Lewis (gr. II) victory who needed a first or second to ensure a starting spot in next month’s Derby, faded to third.

California Chrome (earner of $1,134,850), a flashy chestnut owned by Perry Martin and Steve Coburn, heads to Louisville for the Kentucky Derby May 3 as the likely favorite off his impressive four-race winning streak.

Trained by 77-year-old Art Sherman, a veteran horseman who is getting his first chance with a colt of this quality, California Chrome paid $3.40 to win as the smooth-running 4-5 favorite in the field of eight 3-year-olds. Sherman was the former exercise rider of the great Swaps, another California-bred who won the Kentucky Derby in 1955.

Could this one be as good? Only time will tell.

“He’s my Swaps, let’s put it that way,” Sherman said while declining to make a comparison. “If all goes well, we’ll ship to Kentucky probably a week before the Derby.”

California Chrome was coming off a 7 1/4-length victory in the San Felipe Stakes (gr. II) March 8 and there was strong consideration given to passing the Santa Anita Derby and allowing the colt to train up to the Derby.

Instead, his connections opted to run, with the winner’s share of $600,000 no doubt a strong factor.

California Chrome and Candy Boy, starting from posts 5 and 6, were both in tight and jostled at the start of the race, allowing 30-1 outsider Dublin Up, leaving from the far outside, to clear the field and take the advantage into the clubhouse turn.

The favorite was never more than about half a length behind Dublin Up as Candy Boy and Gary Stevens, seeking his 10th win in the Santa Anita Derby, were well positioned just to their outside. Hoppertunity settled into fourth toward the inside after completing the opening quarter mile in a sensible :23.05. They raced in that order through a half mile in :47.15 and six furlongs in 1:10.81 before California Chrome, rounding the final bend, turned up the heat.

“He knows what’s going on,” Espinoza said of California Chrome’s demeanor. “He’s calm and focused. For some reason, we missed the break a tiny bit, but I put him in the race right away. I didn’t want to get stuck in traffic. It worked out well.”

California Chrome was in command in just a matter of a few jumps as Hoppertunity and Mike Smith rallied from between horses and attempted to draw closer. But they were no match for the winner, who reached mid-stretch five lengths best and cruised home under a long hold from Espinoza.

“It was awesome. That’s all I can say,” Sherman said. “I got a little spooked leaving the gate. He got banged around pretty good, but I really think he’s a better horse stalking.

“When he won the San Felipe, he was on the lead all the way which is something new to me, but I really prefer this type of race where he’s right off the lead.”

Hoppertunity finished 3 1/2 lengths in front of Candy Boy, who ran out of steam while making his first start since winning the Feb. 8 Lewis. Dublin Up held on for fourth, followed by Big Tire, Rprettyboyfloyd, Friendswith K Mill, and Schoolofhardrocks.

With 100 points for the win, California Chrome jumped to the head of the Kentucky Derby points leaderboard, used to determine the 20-horse field, with 150 points. Hoppertunity moved into sixth with 95, while Candy Boy, with 30, ranks 16th. There are two major Derby preps still to go, the Toyota Blue Grass (gr. I) and Arkansas Derby (gr. I), both April 12, putting the C R K Stable homebred trained by John Sadler squarely on the cusp with several others.

“I know Victor (Espinoza) got banged around at the start and we did, too,” Stevens said of his ride with Candy Boy. “We settled down and we were comfortable, but I could see that Victor was very confident, while giving his horse a little breather. I could tell Victor was going very easy when he began to move. He moved out on the turn and the horse took off. I think my horse will continue to improve.”

Bred by Martin and Coburn out of Love the Chase, a winning Not For Love mare they purchased for $8,000, California Chrome boosted his career earnings to $1,134,850. He has won six of his 10 lifetime starts with one second.

“Right now, he’s kind of freaky and I’m enjoying it,” Sherman said of the winner. “I can’t believe the races I’ve been seeing. A length or two might have been all right with me.”

Baffert said there was no doubt that Hoppertunity would be joining California Chrome in the Kentucky Derby.