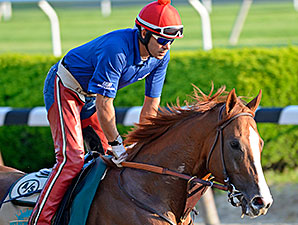 A 3-year-old colt whose Triple Crown bid ended in the June 7 Belmont Stakes (gr. I), California Chrome was rated at 124 in the rankings, compiled by a committee for the period covering Jan. 1-June 8.

Continuing to top the rankings with a 130 rating is Japanese-based Just A Way, winner of the Yasuda Kinen (Jpn-I) at Tokyo Racecourse June 8. Rated at 126 and second in the rankings is Variety Club, the South African-based winner of the Godolphin Mile (UAE-II) on the Dubai World Cup card in March.

Santa Anita Handicap (gr. I) winner Game On Dude, most recently second in the Charles Town Classic Stakes (gr. II), is tied with Kingman, an impressive five-length winner of the Tattersalls Irish One Thousand Guineas (Ire-I), for third overall. Game On Dude is the highest rated U.S.-based horse at 125.

Rated along with six other horses at 123 are Metropolitan Handicap (gr. I) winner Palace Malice and Oaklawn Handicap (gr. II) winner Will Take Charge, the only two other U.S.-based runners among the top-ranked horses.