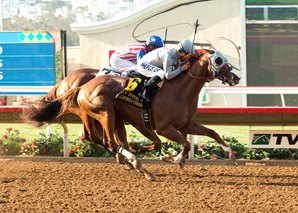 By Jay Privman
DEL MAR, Calif. — California Chrome and Dortmund turned the Grade 2, $200,000 San Diego Handicap into a match race on Saturday, with California Chrome prevailing officially by a half-length — it looked closer to a neck — after a duel that saw them together for the final three furlongs of the 1 1/16-mile race.

California Chrome spotted Dortmund five pounds (126-121) while making his first start since the Dubai World Cup. Dortmund had not run since November.

Dortmund shot to the lead under Gary Stevens, but California Chrome and Victor Espinoza were right on his hip down the backstretch through a 47.02-second half-mile. They went six furlongs in 1:10.51, a mile in 1:34.49, and California Chrome completed 1 1/16 miles on the fast main track in 1:40.84.

California Chrome led narrowly with a sixteenth to go, but Dortmund valiantly battled back and was nearly even with 30 yards to go before California Chrome asserted his superiority. It was another 7 1/4 lengths back to Win the Space in third.

When California Chrome returned to the winner’s circle, he was given a rousing cheer by the fans.

Art Sherman trains California Chrome, a son of Lucky Pulpit, for a partnership that includes Perry Martin and Taylor Made Farm. He has now won 13 of 22 starts, including his last four. His next start will be the Grade 1, $1 million Pacific Classic here on Aug. 20.