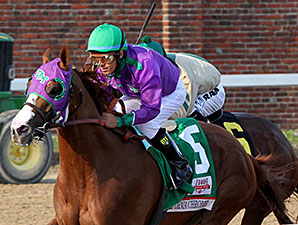 By Steve Haskin
Eclipse Award voters did not have an easy time of it in 2014. In most years, they do not have to give much thought to who they are going to vote for in the 3-year-old male division, as it is pretty clear-cut. Not so last season.

To give an example of how unusually deep the crop was, 3-year-olds won an amazing five grade I stakes against older horses, and that was done by four different runners (Shared Belief, Bayern, Tonalist, and Hoppertunity). Together they captured the Breeders’ Cup Classic, Jockey Club Gold Cup, Pacific Classic, Awesome Again Stakes, and Clark Handicap.

Missing from this list of 3-year-olds was the champion himself, California Chrome, which pretty much tells you all you need to know regarding the impact this brilliant California-bred made on the Triple Crown and the sport in general.

California Chrome, who is by the stallion Lucky Pulpit that stood for $2,500 out of the $8,000 claimer Love the Chase, was one of those rare horses who transcended the sport and put his name and the names of his trainer, Art Sherman, and his owner/breeders, Perry Martin and Steve Coburn, on the lips of people all over the country and onto headlines of major newspapers and TV sports reports. The flashy chestnut became racing’s newest glamour star.

He accomplished this by winning the Kentucky Derby Presented by Yum! Brands (gr. I) and Preakness Stakes (gr. I), as well as the Santa Anita Derby (gr. I) and San Felipe Stakes (gr. II) to establish himself as one of the most exciting young horses in years.

But because of the strength and depth of the 3-year-olds, he still had to prove himself at the end of the year, and his gutsy third-place finish, beaten two necks, in the Breeders’ Cup Classic off only one race in almost six months and his impressive victory in the grade I Hollywood Derby in his grass debut gave him a complete resume that stretched from Jan. 25 to Nov. 29.