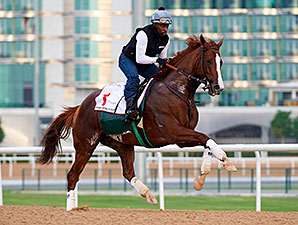 By Claire Novak
California Chrome drew wide for his March 26 Dubai World Cup (UAE-I) quest, a bid to go one better after running second in 2015. But if trainer Art Sherman is bothered by post 11 in a field of 12, he’s not letting it show.

“Listen, the outside is good, if you’ve got the horse, and I hope we do,” Sherman said March 23, as he and other connections of the 2014 Horse of the Year waited until second-last to see their runner’s name drawn for post position selection for the $10 million Dubai World Cup. “There wasn’t too much I could do about the draw. He’s got tactical speed, so I’m not going to worry about it.”

Grade I winners Frosted, Mshawish, Hoppertunity, and Keen Ice join the charismatic chestnut in representing the U.S. in the 21st edition of the World Cup. Last year California Chrome broke from post 9 and was beaten 2 3/4 lengths by Prince Bishop.

“We lost ground on every turn. He had to lose maybe three or four lengths in the race,” Sherman said of the 2015 running. “Being a former jockey, I know that saving ground means a lot. He was on a five-horse spread, they were bumping each other. If (this race) is a little bit smoother, I think he’ll run really well.”

Frosted’s connections selected the 9 hole, Mshawish’s chose post 2, Hoppertunity was left with post 10, and Keen Ice will break from the rail—a location owner Jerry Crawford selected rather than going outside with the closing colt, who will have first-time blinkers in Saturday’s running. A field of 12 lines up for the 2,000-meter (about 1 1/4 miles) test, where contenders from the United Arab Emirates, France, Great Britain, Hong Kong, and Japan are also set to challenge.

Regular rider Victor Espinoza will be aboard California Chrome for the race, which goes with a post time of 1 p.m. EDT (9 p.m. local time).

“I’d rather be outside than in the one hole,” Espinoza said. “We all know the one hole is the short way around, but it’s a lot of horses, a big field, and for that reason, it’s OK. I think 11 is good.”

Espinoza said, despite memories fans may have of California Chrome preferring to run outside, the long-striding horse has matured.

“That was before, in his early races, when he was a young horse, a 3-year-old,” he remarked. “Now, he’s getting older. He’s just more professional, more agressive. Kind of like he’s not afraid any more, like he used to be. For some reason, he used to be a little bit afraid inside, on the rail. But I rode him a month ago over here, and I was stuck inside, and it seems like it was not a problem. Now that I have the 11, I think I just have to go with the flow.”

“We want to be out in the clear and didn’t want to be down inside too much, so we’re happy where we are,” trainer Kiaran McLaughlin said of Frosted’s post position. “William can work out a trip; there’s a long run from the start to the turn. He’s going to be forwardly placed… with California Chrome outside, we’ll just have to see what happens.”

While five Dubai World Cup entrants are U.S.-bred and based, two others were also bred in America; Saudi Arabia’s Teletext, and Candy Boy, who now represents the UAE.