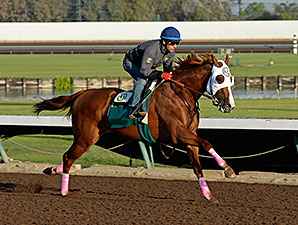 Afterward, trainer Art Sherman was enthusiastic in his assessment of California Chrome’s conditioning in advance of the 1 1/4-mile Breeders’ Cup Classic Nov. 1 at Santa Anita Park

Los Alamitos clockers caught California Chrome in splits of :24 1/5 and :48, with a gallop out in 1:12. The chestnut colt cantered to the pole with the pony and broke off like a bullet on the backside. He keenly cruised around the turn before sailing down the lane well within himself, Espinoza quiet in the irons.

California Chrome’s five-furlong time was the second swiftest of 20 on the morning at Los Alamitos.

Before losing his bid for the Triple Crown, California Chrome made the Kentucky Derby and Preakness part of a six-race win streak begun with the King Glorious Stakes at Betfair Hollywood Park Dec. 22. He won the San Felipe Stakes (gr. II) and Santa Anita Derby (gr. I) at Santa Anita before leaving California to claim two of the country’s most prestigious 3-year-old races.

“He’s training like his old self, like he trained even before the Santa Anita Derby,” Art Sherman said. “I’m really pumped up. I just know that you haven’t seen the real California Chrome run again since he was on that winning streak.”

Sherman said he wasn’t bothered by the fact that the California-bred Lucky Pulpit colt will not be the favorite in the Classic. California Chrome has gone off as the bettors’ choice in his past six starts, but that nod will likely go to undefeated sophomore Shared Belief.

“Let the pressure be on Shared Belief,” Sherman said. “I look for California Chrome to run a big race. He had kind of a precarious race under his belt (in the Pennsylvania Derby) and I look for him to bounce back pretty darn good right now.”

Following the Belmont Stakes, California Chrome had a five-week freshening at Harris Farms, where he was foaled. He returned to the Sherman Racing stable July 17.

“I’ve been pumped up ever since we’ve gotten back in training (following the Pennsylvania Derby),” Sherman said. “I noticed his attitude is different; he wants to do something, I know he’s run big at Santa Anita, so it’ll be like going back to his home track.”