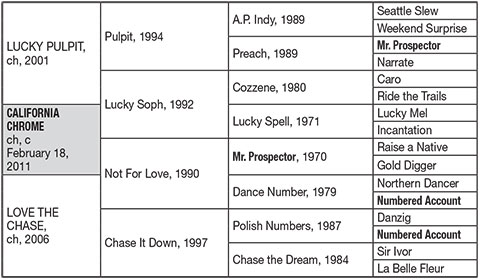 Racing as a homebred for Perry Martin and Steve Coburn, California Chrome is a son of Lucky Pulpit, who stands for an advertised fee of $2,500 live foal at Harris Farms. Currently fourth on the California sires list, Lucky Pulpit has only 99 named foals in his first four crops of racing age but may be poised for bigger things with 62 named juveniles coming to the track in 2014. These youngsters are the progeny of mares attracted to the stallion’s court after he led the California first-crop sires list in 2010 despite being represented by just 10 runners that year.

A muscular, strong-quartered chestnut with the typical dipped topline of the Seattle Slew tribe, Lucky Pulpit is by A.P. Indy’s good son Pulpit out of the winning Cozzene mare Lucky Soph, whose dam Lucky Spell is a half sister to the versatile Seattle Song (by Seattle Slew). A winner of the 1,400-meter Prix de la Salamandre (Fr-I) as a juvenile and the Washington D. C. International (gr. IT) over 12 furlongs at 3, Seattle Song was not as good a sire as he was a runner but did sire the great California matron Cee’s Song, dam of four stakes winners to the cover of Cee’s Tizzy including two-time Breeders’ Cup Classic (gr. I) winner and important sire Tiznow.

A grade III winner on both dirt and turf who won stakes from six to nine furlongs, Lucky Spell was one of the best runners sired by Lucky Mel, a son of the speedy Olympia who proved a very good juvenile in California in 1956. Lucky Pulpit carried on the tradition of versatility suggested by his ancestry; although his only stakes win was in the five-furlong Smile Stakes on turf, he placed in five other turf races at distances up to a mile and was second in the 2004 Santa Catalina Stakes (gr. II) at 8.5 furlongs on dirt as a 3-year-old.

California Chrome is the first foal of Love the Chase, who has an interesting pedigree as she is inbred 3×3 to 1971 champion juvenile filly and high-class matron Numbered Account as well as 3×4 to Northern Dancer. Love the Chase’s sire, Not For Love   (Mr. Prospector—Dance Number, by Northern Dancer), is a full brother to 1989 champion juvenile male Rhythm. Much the inferior of his brother on the track, Not For Love proved by far the better sire, leading the Maryland sires list for nine consecutive seasons (2003-11). Still active at Northview Stallion Station, where he is advertised for $15,000 live foal, Not For Love has sired 74 stakes winners to date and has a sparkling 67% winners from named foals from his first 15 crops.

Love the Chase is out of Chase It Down, whose sire Polish Numbers, a Danzig half brother to Dance Number, was also a good sire in the Mid-Atlantic region. A half sister to multiple listed stakes winner Amourette (by El Gran Senor), Chase It Down is out of the Sir Ivor mare Chase the Dream, a multiple stakes winner in New York-bred company. Chase the Dream, in turn, is out of the unraced Vaguely Noble mare La Belle Fleur, a half sister to four stakes winners including 1977 champion older mare Cascapedia (by Chieftain).

Produced from Princess Ribot (Ribot—Princess Matoaka, by Princequillo), La Belle Fleur was a very stoutly bred mare by American standards. The question is how much of that stamina has come down to California Chrome. As a daughter of 1968 Epsom Derby winner Sir Ivor, Chase the Dream was impeccably bred for stamina, but the next two crosses to the female line, Polish Numbers and Not For Love, suggest more of a tilt towards speed. California Chrome is also inbred 4×3 to the brilliant Mr. Prospector via 1991 Frizette Stakes (gr. I) winner Preach (the dam of Pulpit) and Not For Love. This leaves open the question of whether California Chrome is really a 10-furlong horse, but he has already shown more than enough to suggest that he will be a dangerous customer at almost any distance if he is allowed to settle into a high cruise on or near the lead.

While California Chrome’s pedigree is relatively modest compared to those of some of his potential Triple Crown rivals, he does show an interesting pattern of outcrossing away from the dominant strains in his inbred dam while inbreeding to another top-quality strain. This is a pattern seen in some of the top stock produced by the 17th Earl of Derby, including the important sires Phalaris, Hyperion, Pharos, and Fairway, and was noted by pedigree authority Abram Hewitt as often yielding results on the track or in the breeding shed which were better than anything in the immediate family. California Chrome, of course, has yet to prove himself a top horse on the track, and his breeding career will have to wait a while. But he has already demonstrated that he is a better runner than either his sire or his dam, and he seems headed in the right direction as he progresses down the Triple Crown trail.

Thorn Song out of Evening Walk filly
Scroll to top