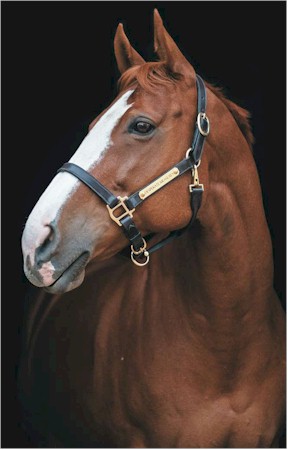 California-bred Desperate Measures, a 10-year-old daughter of Lucky Pulpit, has found a good home in Canada, where owner Jan Melnychuk says the mare “has become a bit of a local celebrity.”

Desperate Measures was featured in Canadian Thoroughbred as an of-track Thoroughbred of the month and as “Miss February” in the 2017 Assiniboia Downs calendar, Melnychuk wrote in an email to John Harris’ Harris Farms, which bred Desperate Measures. The mare also modeled a halter for Greenhawk Equestrian.

“Everyone loves her personality,” wrote Melnychuk, “almost as much as she loves to get out of any sort of work. Divas don’t work, and it is unfortunate that humans don’t understand that.”

A daughter of the High Brite mare Don’t Despair, Desperate Measures began her racing career in the Harris Farms colors. In her second start and frst victory, she was claimed for $40,000. Desperate Measures made most of her 33 starts in California, but she also raced in New Mexico, Iowa, and Canada, ending her career in 2013 at Assiniboia Downs. She earned a total of $112,503.

“She is loved by everyone at the barn for her personality,” said Melnychuk. “She is quite the comedian, and I often get photos from someone at the barn catching her up to something hilarious.”