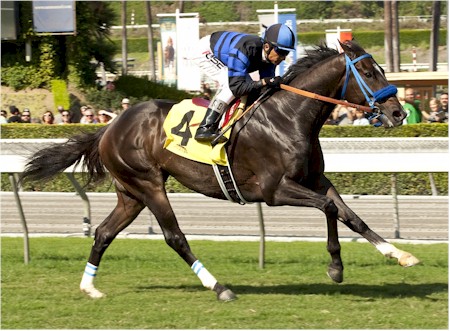 Boozer is by Unusual Heat, out of the Cape Canaveral mare Kitty and Boo, was bred by Abrams, Loverso, Perez, Huston Racing and Auerbach, is owned by Al and Saundra Kirkwood and trained by Mark Glatt.

“I didn’t expect to get the lead too easy,” said Bejarano. “I thought Super Ability (ridden by Martin Garcia) would go straight to the lead but he broke a little slow, so I took us straight to the front and was able to sit comfortably. I didn’t have any pressure and from there it was pretty much over…Today, he ran really well.”

“He’s a very good horse,” said Glatt. “He got a very easy lead but he did his job. He’s a versatile horse. He runs good down the hill and he won very impressively going a mile and a sixteenth (twice at Del Mar), not against stakes horses yet, but he’s very effective…We’ll obviously keep him on the grass. We’ll nominate to several stakes and try to pick the spot that might look like the best one.”

Idle since April 26, Tamarando, ridden by Mike Smith, sat closer to the pace than many expected and fought off a determined challenge from Super Ability to finish second by a half length. Off at 5-2, he paid $2.80 to place.

“I was a little surprised I was sitting second, but this horse hasn’t run in a long time and I warmed him up by himself,” said Smith. “I took him back and forth a few times across the dirt and he was pretty fresh. I tell you what, he’ll come out of this race and run big next time.”