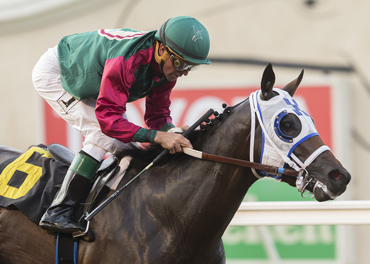 From DMTC Publicity
DEL MAR, Calif. (Nov. 4, 2017) — Under a typically vigorous ride by Hall of Famer Kent Desormeaux, Bookies Luck held on tenaciously in the final strides to nose out the hard-charging Smokem in the $200,000 Golden State Juvenile Stakes Saturday, the second of 12 races on the second day of the Breeders’ Cup Championships at Del Mar.

Bookies Luck, the narrow 8-5 favorite over Smokem, who also went to the post at 8-5, scored his third win in six starts in a game performance for breeders and owners Mr. and Mrs. Larry D. Williams and trainer Jeff Bonde.

“The outside post helped us a lot,” said Bonde. “This is a really deep track and you’ve got to have something left at the end. I think Kent (Desormeaux) did a really good job of rationing his speed and it was really close at the end.”

Smokem, who was piloted by Evin Roman, finished four and one-half lengths in front of third-place Lucky Romano, with Campaigner fourth in the field of seven California-bred two-year-olds. Schulace was withdrawn from the original line-up.

“Compliment to the trainer he was a different horse today than last time,” said Desormeaux. “He really settled very nicely. The extra furlong might be a lot for him, but Mr. Bonde had him nice and calm for five-eighths. He had plenty to finish the last eighth of a mile. He was running through the lane.”