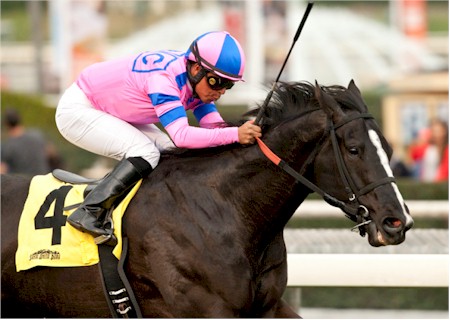 “I was really comfortable,” he said.

His impressions were rewarded when Betty’s Bambino took a one-length lead with a furlong remaining. Betty’s Bambino held off a threat from Ambitious Brew to win the turf sprint for California-breds for his second consecutive stakes win.

The Sensational Star was the fourth consecutive win for Betty’s Bambino, who is owned by the partnership of Sharon Alesia, Bran Jan Stable, and Ciaglia Racing and trained by Peter Eurton.

“I had a clean trip,” Garcia said. “I got him to the outside and he ran really well.”

Betty’s Bambino was third on the hillside, racing within two lengths of pacesetter Pathway to Yes, a 14-1 outsider. Ambitious Brew closed from sixth to finish a clear second, 1 1/2 lengths in front of Boozer and Spirit Rules, who finished in a dead heat for third. Patriots Rule was fourth, followed by Big Bane Theory, Weewinnin, and Pathway to Yes.

“I thought he ran well,” trainer Marty Jones said. “That horse that won is a little sharper than my horse is right now.”

Betty’s Bambino’s winning streak includes an allowance race in September, an optional claimer in October, and the Grade 3 Daytona Stakes on Dec. 28, all on the hillside turf course.