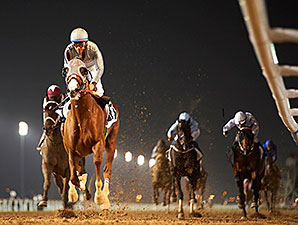 By Frank Angst
California Chrome appears to be going into the Dubai World Cup Sponsored by Emirates Airline (UAE-I) in top form after cruising to an easy two-length victory in the $143,000 Trans Gulf Electromechanical Trophy Handicap Feb. 25 at Meydan Racecourse in the United Arab Emirates.

With Victor Espinoza sitting chilly, California Chrome tracked two- or three-wide in the far turn just behind early leader Success Story, a Korean-bred who had not previously placed in a stakes. When asked just a bit in early stretch, the 2014 Horse of the Year quickly opened up on the over-matched field and waltzed to the wire.

Now campaigned by “California Chrome Inc.”, which includes Perry and Denise Martin, Taylor Made, and several prominent breeders, California Chrome is being pointed to the Dubai World Cup March 26 at Meydan, where the two-time classic winner finished second last year. Thursday’s stakes race was contested at the World Cup distance of about 1 1/4 miles and California Chrome completed the race in 2:04.24 on a fast track.

On the race broadcast Sherman called it a perfect race and said it was great to get a 1 1/4-mile test under his belt ahead of the Dubai World Cup. Espinoza said the win was as easy as it looked.

California Chrome is the second U.S.-trained older horse being pointed to the Dubai World Cup to register a big win in Meydan in recent weeks as Godolphin Racing’s Frosted won the Al Maktoum Challenge Round Two Sponsored by EGA on Feb. 4 for trainer Kiaran McLaughlin.

While the finish certainly was easy, Espinoza had to change plans early. After breaking well, California Chrome was backed off the early pace then soon found himself behind horses. But Espinoza was able to find a tracking position in the backstretch through 800 meters in :51. Despite carrying about 132 pounds, 15 more than any of his seven rivals, California Chrome quickly opened up in early stretch and was not challenged late.

Tizbud out of Kathwen filly foaled February 26
Scroll to top