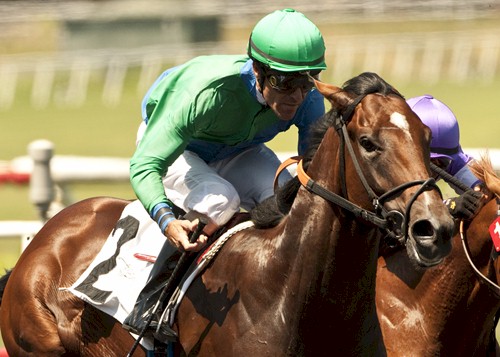 Able to get away with a pedestrian 23.05 opening quarter of a mile, Alpine Luck had enough left to hold off challengers to his inside and outside in the stretch en route to a half-length win. The final time for the six furlongs over Cushion Track was 1:11.44.

Now 2-for-2 under Hall of Fame jockey Gary Stevens after beginning his career with consecutive third-place finishes in May, Alpine Luck pushed his earnings to $146,784 for owner-breeder Heinz Steinmann and trainer Mike Harrington. He paid $11.60, $5.80 and $3.80 as the 9-2 fourth choice in the field of seven.

The victory by the California-bred son of Lucky J. H. and the Swiss Yodeler mare I Can Yodele was the second in the Juvenile – following Swiss Yodeler in 1996 – for Steinmann and Harrington.

Stevens, who ended his retirement in January, earned his fifth win in the Juvenile, but first since K.O. Punch in 1997. His other victories came with Hilco Scamper (1985), Deposit Ticket (1990) and Hennessy (1995).

“I wasn’t concerned being on the lead with him,’’ said Stevens. “Last time (Harrington) told me to ride him like a route horse, but he got a flyer leaving there and was on the lead.

“He got a quick break today and he was flicking his ears back and forth down the backside. He actually reminded me a lot of my first winner (Hilco Scamper) in this race.

“I was just playing with (Ontology) the other day. I could have won by six, so I had quite a bit of confidence going in. I actually wanted a horse in front of him just to teach him. I really do think he wants to go a route of ground.’’

“I keep kidding (Stevens) because I tell him to ride him like a route horse and he keeps going to the front,’’ said Harrington. “I told him, ‘You never listen.’ He said he was going (23.05) and had no choice.’’

Second, 1 ½ lengths behind Alpine Luck in his career debut June 22 for Reddam Racing LLC and trainer Simon Callaghan, Ontology completed the exacta again Saturday after a ground-saving trip under jockey Rafael Bejarano. He paid $4.60 and $2.80.

Willie B Awesome, the 5-2 second choice and runner-up to impressive debut winner Kobe’s Back in the Willard L. Proctor Memorial June 15, was third, a nose behind Ontology and a head in front of Solid Wager. The full brother to multiple graded stakes winner Willa B Awesome returned $2.40 to show.

Edwin Maldonado, who rode Solid Wager, claimed foul against Martin Pedroza, who was aboard Willie B Awesome, for alleged interference on the backstretch, but it was quickly dismissed by the stewards.

Completing the order of finish were a trio of first time starters – Bond Holder, Carson’s Ten and Knock Em Flat, who didn’t break alertly as the 2-1 favorite.