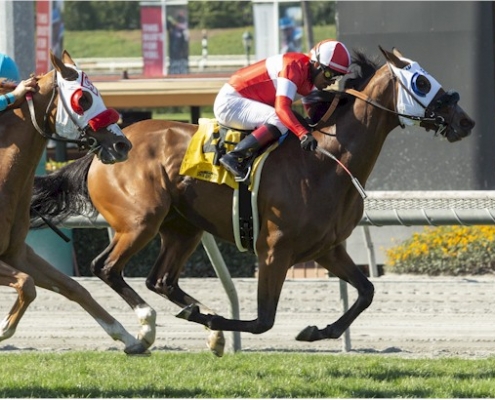 From Santa Anita Publicity
ARCADIA, Calif. (June 23, 2019)–In sharp recent form and blessed with an abundance of natural speed, California-bred Acclimate took six rivals on a merry chase that resulted in a stirring half length victory in Sunday’s Grade III, $100,000 San Juan Capistrano Stakes at Santa Anita. Ridden by Martin Garcia and trained by Phil D’Amato, the 5-year-old gelding by Acclamation got the marathon mile and three quarters on turf in 2:48.80.

Fresh off a gate to wire victory in a 1 1/8 mile turf starter allowance on May 31, Acclimate broke sharply and was immediately under a snug hold down the hill and enjoyed a three-length advantage heading into the Club House turn. With favored Causeforcommotion beginning to tire in second position, Garcia let out a notch a quarter mile from home and Acclimate enjoyed a three length advantage over eventual runner-up Oscar Dominguez a furlong from home en route to a hard fought win.

“It was all in the instruction Phil gave me,” said Garcia. “He said, ‘Just break, take the lead and don’t look back. He has natural speed and he is going to handle (the distance) no problem. When I asked him, he just responded and they never caught me.”

Owned by the Ellwood Johnston Trust and Timmy Time Racing, Acclimate, who is out of the Boundary mare Know No Bounds, was bred by the Johnston family’s Old English Rancho, Sal Berumen and Patsy Berumen. A winner in his first stakes appearance, Acclimate is now 14-5-1-2 and with the winner’s share of $60,000, he has earnings of $175,521.

“When this horse gets comfortable, he keeps clipping those steady fractions,” said D’Amato. “Even though he was going fast, he was kind of doing it the right way. He didn’t look like he was all out. I knew they were coming to him at the half mile pole and Martin kind of turned him loose and he opened up again…Hat’s off to Martin. He rode a brilliant race.”

Irish-bred Oscar Dominguez, next to last early, rallied strongly but was second best, finishing 1 ¼ lengths in front of Red King. Off at 5-2, Oscar Dominguez paid $4.00 and $3.20.

Red King never threatened and finished 5 ¼ lengths in front of stablemate Ya Gotta Wanna, the third D’Amato-trained horse in the San Juan. Off at 7-1 with Aaron Gryder, Red King paid $5.40 to show.