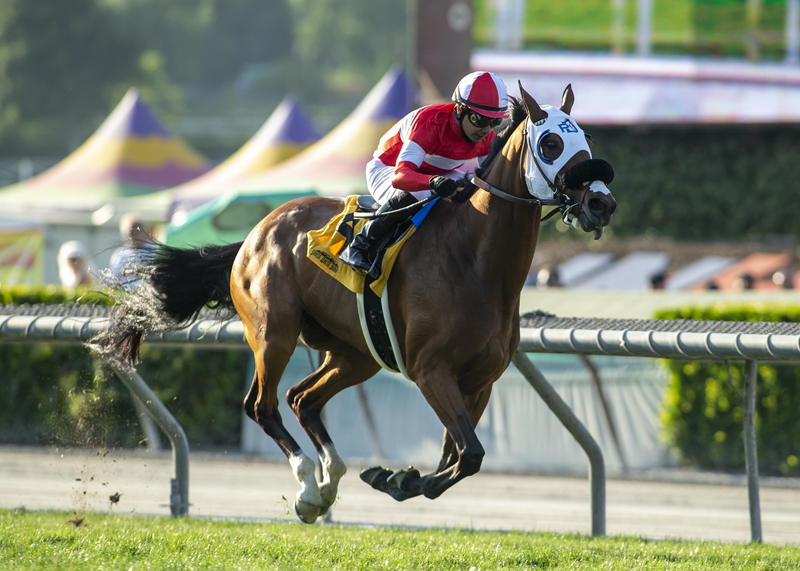 Courtesy of Santa Anita Park ARCADIA, Calif. (June 19, 2021)–As Yogi Berra once famously noted, “It’s déjà vu all over again.” Such was the case in the 81st running of the Grade III, $100,000 San Juan Capistrano Stakes on Saturday at Santa Anita, as 7-year-old California-bred gelding Acclimate skipped to a 3 ¾ length victory, replicating his gate to wire score in the 2019 San Juan. Trained by Phil D’Amato, who collected his third consecutive win in Santa Anita’s signature turf marathon, Acclimate was ridden by Ricky Gonzalez, who coaxed a mile and three quarters out of the son of Acclamation in 2:49.74.

With a traditional hillside start, Acclimate went right to the front and had his ears up as he made the dirt crossing at the top of the lane. With a two length advantage around the Club House turn, Acclimate was running easily while pursued by Ward ‘n Jerry and Pillar Mountain in the run up the backside.

With three furlongs to run, Gonzalez stepped on the gas, but eventual runner-up Astronaut was about to make an eye-catching run of his own around the far turn. Although he loomed into contention a quarter mile out, Astronaut was unable to sustain his bid and Acclimate made it look easy as he widened his margin late.

“Just get him in front, nice and comfortable is where he likes to be,” said Gonzalez, who had ridden him to a close second place finish going a mile and one quarter on turf in the Grade II Charles Whittingham Stakes on May 29. “Just keep the other horses away from him and he’s as happy as he could be. I was really happy.

“We barely got beat last time. It was just the head bob, but after the wire he was in front again, so in knew the distance wasn’t going to be a problem for him. Today, I’m just relieved that he got it done so easy.”

Bred by Old English Rancho and Sal and Patsy Berumen, Acclimate, who is out of the Boundary mare Knows No Bounds, is owned by the Ellwood Johnston Family Trust, Timmy Time Racing, LLC and Ken Tevelde, had been winless since winning the Grade II Del Mar Handicap nine starts back on Aug. 17, 2019. With his third graded stakes win in-hand, Acclimate is now 25-7-4-4 and with the winner’s share of $60,000, increased his earnings to $557,872.

“This horse, he’s been through the highs and lows and he’s bounced back,” said an emotional D’Amato, Santa Anita’s leading trainer with 50 wins, 15 of them stakes, second to Bob Baffert’s 17. “He’s just an old warrior and he gave it his all today. It’s just a beautiful thing to watch…Ricky did a masterful job of maintaining the distance and setting those comfortable fractions to have enough horse left. It’s a credit to him and the horse. To dial those fractions in the way he did, Ricky rode like a seasoned veteran at this distance.

“The San Juan Capistrano was my favorite race growing up. When I was a kid coming to the races, this is the race I always came to see. I thought this was an “A” performance for him today and this is a horse I would target for the Del Mar Handicap. He has been lightly raced. We gave him a short break and he has come back better than ever.

Trained by D’Amato and ridden by Umberto Rispoli, Red King was the second choice at 2-1 and paid $2.40 to show while finishing three lengths in front of Ward ‘n Jerry.