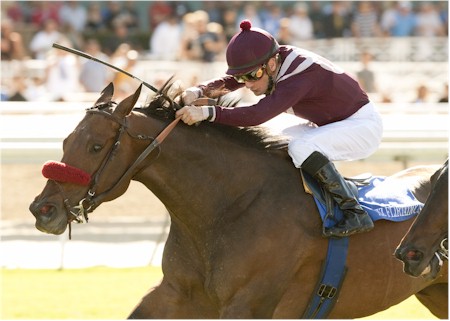 The trio approached the finish line in near unison, with Tiz Flirtatious thrusting out her nose in the final stride for a narrow win over Marketing Mix, turning the tables on that rival, who defeated her in the Gamely Stakes (gr. IT) this spring at Betfair Hollywood Park.

The Rodeo Drive victory under Julien Leparoux guaranteed Tiz Flirtatious a start in the $2 million Breeders’ Cup Filly & Mare Turf (gr. IT) Nov. 2 at Santa Anita as part of the “Win & You’re In” challenge series. Owner-breeder Pamela Ziebarth said the 5-year-old Tizbud mare will be entered in the race, run at the Rodeo Drive distance of 1 1/4 miles.

California-bred Tiz Flirtatious, who is out of the unraced raced Victory Gallop mare Masquerade Belle, earned her first win at the elite level in the Rodeo Drive. Her defeat in the Gamely bookended victories in the Santa Ana Stakes (gr. II) in March at Santa Anita and the John C. Mabee (gr. IIT) Aug. 11 at Del Mar in her previous start for trainer Martin Jones. The Rodeo Drive was her fourth win from five starts this season.