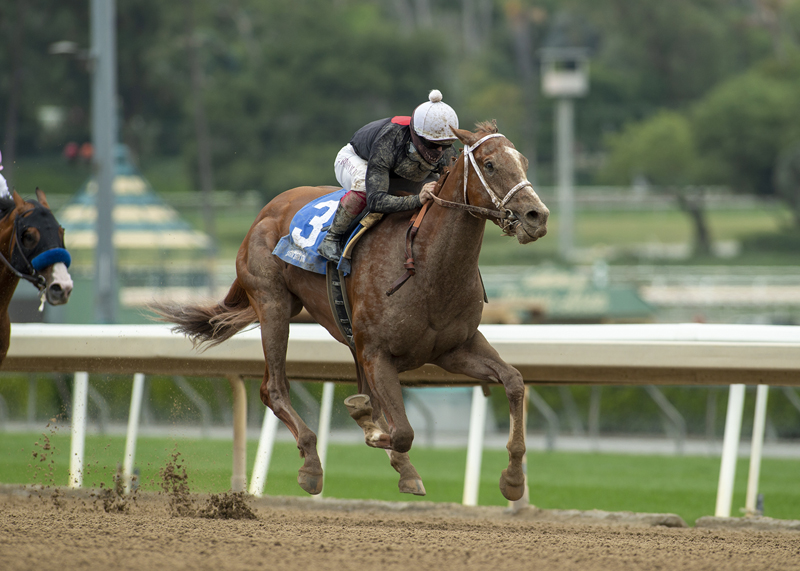 Courtesy of Santa Anita ARCADIA, Calif. ( May 15, 2021) With Laurel River and I’ll Stand Taller duking it out on the front-end, trainer Eric Kruljac’s The Chosen Vron flew off the turn for home and marched to an emphatic 3 ½ length win in Saturday’s Grade III, $100,000 Lazaro Barrera Stakes at Santa Anita. Ridden for the first time by Umberto Rispoli, the California-bred gelding by Vronsky got 6 ½ furlongs in 1:16.28.

In a field of four sophomores, it was readily apparent from the outset that I’ll Stand Taller and Juan Hernandez were not going to allow impressive recent maiden winner Laurel River and Abel Cedillo to have their way on the front end as they blazed an opening quarter mile in 21.32.

With I’ll Stand Taller shrinking noticeably a quarter mile out, The Chosen Vron was making an eye catching move at the rail blew by Laurel River with a furlong to run.

“I could see they were going really fast, those two horses up front, and by the quarter pole my horse was right on top of them, he really kicked well in the stretch,” said Rispoli. “When I first came here, (J. Eric Kruljac) gave me so many winners, I’m happy to finally give him a stakes win.”

The Chosen Vron, fresh off a sparkling 6 ½ furlong win versus Cal-Breds in the Echo Eddie Stakes on April 3, was off as the 3-5 favorite and paid $3.20 and $2.10 with no show wagering.

“Short fields sometimes end up being like match races,” said breeder and part owner Kruljac. “I knew my horse could rate….Doug (O’Neill) had a horse in there that looked like he would use as the rabbit, so that kind of eliminates the match race. He softened them up early and I don’t know if it mattered, with the way the horse fired today. He’s a pretty exciting horse, when you breed them yourself there’s this extra pride that goes into it. I’m as excited as I can be.”

Owned J. Eric Kruljac, Robert Fetkin, John Sondereker and Richard Thornburgh. The Chosen Vron, who is out of the Tiz Wonderful mare Tiz Molly, picked up his first graded stakes win and has three wins from four starts. With the winner’s share of $60,000, he increased his earnings to $210,600.