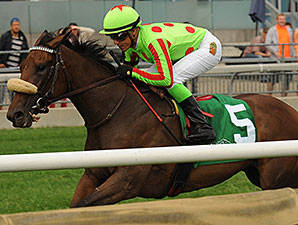 By Jerry Bossert
Making just her third career start, Speed Seeker (Heatseeker) became a stakes winner when she rallied from off the pace to take the $154,417 Ontario Colleen Stakes (Can-IIIT) over the Woodbine turf course Aug. 23.

Sent off as the 5-2 favorite in the field of nine 3-year-old fillies, Speed Seeker split pacesetter Executive Allure and stalking Daring Kathy approaching mid-stretch under jockey Luis Contreras before pulling away from the pack to score by 4 3/4 lengths.

Owned by Robert K. Johnson, Frank Coniglio, Richard Rendina, and Frank Ferrigine, the Heatseeker   filly finished a close fifth in the grade II Lake George Stakes at Saratoga Race Course July 23, beaten by 2 1/4 lengths in her initial stakes try. She easily broke her maiden in her debut by 7 3/4 lengths June 8 at Woodbine over the E.P. Taylor turf course.

“The first time she showed a lot of speed and finished really well,” Contreras said. “Today was kind of the same thing. She had some trouble leaving the gate. I tried to get her to relax. When I asked on her in the lane she gave me a tremendous kick.”

A few strides out of the gate, Contreras had to snatch up Speed Seeker as she was in tight quarters and checked back to sixth when pressured from the outside by Unspurned. But in the stretch she finished full of run under a hand-ride to win for the second time from three starts.

“I was disappointed with her trip at Saratoga but I love her and I loved her trip today,” said trainer Joan Scott, who won her first stakes race at Woodbine. “It didn’t look good but it worked out perfect. I love this place and the whole facility.”

Executive Allure set the pace under Jesse Campbell, while being pushed through a six furlongs in solid fractions of :22.95 and :45.28, and 1:09.63 by Daring Kathy over the turf course that was labeled good.

The pair turned for home together before Speed Seeker, who was bred by Katherine Devall and the Heatseeker Syndicate in Florida, burst between them to prevail going away. Executive Allure won the photo for second by a neck over Daring Kathy.

Cactus Kris finished fourth and was followed out by Hot and Spicy, Unspurned, Madly Truly, Ready to Act, and Holy Empress.

Out of the Southern Halo mare Seraphic Too, Speed Seeker increased her bankroll to $118,915.