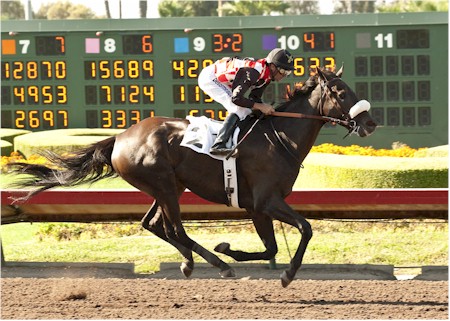 By Steve Andersen
CYPRESS, Calif. (July 3, 2014)-Summer seems to be the ideal season for Soi Phet, who won Thursday’s $101,000 Bertrando Stakes for California-breds on the opening day of the Los Alamitos Thoroughbred meeting.

Thursday’s Bertrando Stakes was Soi Phet’s second consecutive win. He won a starter handicap at Santa Anita on June 8 in his previous start. Soi Phet will run next in the $200,000 San Diego Handicap at Del Mar on July 24, trainer Leonard Powell said.

Soi Phet won the first stakes of his career in the one-mile Bertrando Stakes. Ridden by Kent Desormeaux, Soi Phet ($24) closed from fourth in a field of nine to win by 3 3/4 lengths over pacesetter Spirit Rules, a 9-1 shot.

“I had a lot of confidence in him,” Powell said. “I told Kent to cut the corner and see where he was at. He’s very versatile because he’s got so much class.”

Soi Phet, a 6-year-old gelding by Tizbud, has won 7 of 27 starts and earned $352,436 in his career. Soi Phet has won 6 of 11 starts and earned $315,356 since being claimed. One of the losses was a third in the Grade 1 Awesome Again Stakes at Santa Anita last September, won by eventual Breeders’ Cup Classic winner Mucho Macho Man.

Soi Phet was timed in 1:34.50, the fastest of three one-mile races on Thursday. The program was the first of eight days of racing at Los Alamitos through July 13.