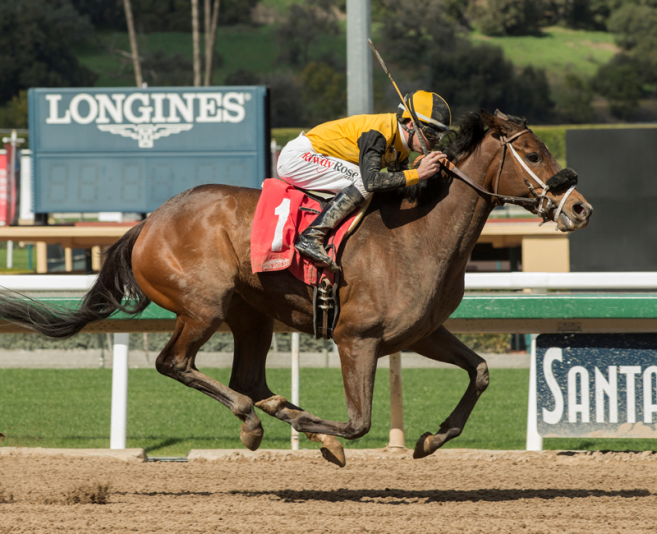 ARCADIA, Calif. (March 15, 2018)–Trainer David Bernstein’s Smiling Tigress blew by heavily favored Strike At Daylight with a sixteenth of a mile to run to take Thursday’s $56,000 Santa Anita allowance feature by 3 ¾ lengths. Ridden patiently from her rail post position, the 3-year-old California-bred daughter of Smiling Tiger got six furlongs on a fast track in 1:10.94.

“She’s a pretty nice filly,” said the affable Bernstein. “She’s getting better and better all the time and Tyler rode her great. She wants to come from off the pace, that’s her best way to go. We’ll see how she is and look at some Cal-bred stakes.”

Second in her last two starts at the level, but winless in four races since breaking her maiden here on Oct. 5, Smiling Tigress was off at 9-2 in a field of eight California-bred or sired fillies and mares and paid $11.00, $4.40 and $3.40.

Owned by Naseer Mohammed Fasihuddin and Madiha Sarwar, Smiling Tigress picked up $33,600 for the win, increasing her earnings to $107,485. Her overall mark now stands at 9-2-3-0.

The 3-2 favorite with Geovanni Franco, Strike At Daylight sat just off early pacesetter Love a Honeybadger into the far turn, took command a quarter mile out but was no match for the winner while finishing second, a head in front of an on-rushing Red Stich.

Ridden by Rajiv Maragh, Red Stich broke a bit awkwardly, wheeled four-wide coming into the stretch and just missed the place. Off at 5-1, Red Stich finished 2 ¾ lengths in front of Pied N True and paid $2.80 to show.