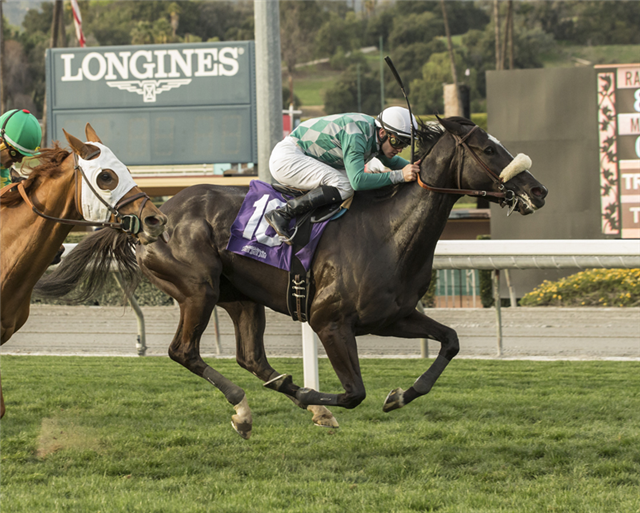 Mid-pack early and fourth at the rail a quarter mile from home, Battleground State was all business turning for home as she kicked off the final turn to overhaul pacesetter X S Gold a sixteenth of a mile out and prevailed late over a fast finishing My Aunt Tillie at the wire.

Most recently a close fifth at the level going 6 ½ furlongs down the hillside turf course, Battleground State was off at 6-1 in a field of 10 California-bred or sired fillies and mares three and up and paid $15.40, $8.80 and $5.20.

“She made a nice little run down the hill the other day (Jan. 5) and I thought she ran really well today,” said Drysdale, who picked up his eighth win of the meet from 32 starters—a 25 percent win clip. When asked about the high percentage meet he’s currently enjoying, the veteran Hall of Famer quipped, “Eddie Truman and I are drinking from the same fountain.”

Last after the first half mile, My Aunt Tillie unleashed a furious stretch rally to just miss while edging X S Gold for the place by three quarters of a length. Ridden by Corey Nakatani, My Aunt Tillie was off at 13-1 and paid $12.60 and $6.60.