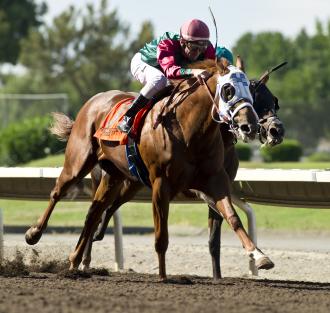 By Chuck Dybdal
Pleasanton, CA (July 7, 2018)-Trainer Jeff Bonde had plenty of reason to celebrate in his hometown of Pleasanton, Calif. on Saturday when Luck’s Royal Flush ($21.40) showed his heels to five rivals, winning the $100,225 Everett Nevin stakes in the signature race for the Oak Tree at Pleasanton meet at the Alameda County Fair.

“Hometown wins are really special,” said Bonde, whose colt was the most experienced runner in the field of six 2-year-olds after winning his maiden at third asking last time at Santa Anita.

He put his head in front nearing the quarter pole as Call Waiting began to wilt.

“He took me to the lead all by himself,” said Elliott. “It’s easier breaking from the outside because it puts less pressure on you.”

Luck’s Royal Flush opened a three-length lead in the stretch as Cozze Kid, the lone filly in the field, moved up with a four-wide move after breaking slowly from the rail.

“I knew he had a lot left in the lane,” said Elliott, who was confident all the way down the stretch despite a late rally by Leadville, the longest shot on the board at 43.60-to-1, who broke slowly before swinging six wide in the lane.

Despite running a bit erratically at midstretch, Leadville finished determinedly but was still a half-length behind Luck’s Royal Flush, who reached the wire in the 5 1/2-furlong race in 1:05.00. Odds-on favorite Mr Paytience, who could not match Leadville in the lane, finished a neck back in third, five lengths in front of second-choice Cozze Kid.

“[Luck’s Royal Flush] had a rough trip the first time,” said Bonde of the Larry and Marianne Williams homebred, who was fourth in his career bow on May 5 at Santa Anita. “He lost a heartbreaker the second time when he was stuck on the rail.

“He can get a little hot, but he had a really good week here.”