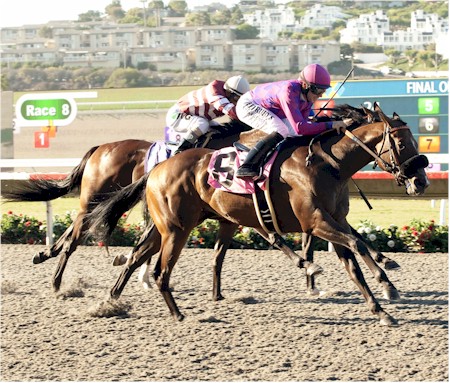 In May, she was the $260,000 sale-topper at the Barretts sale of 2-year-olds in training. On Wednesday, she remained unbeaten after two starts with a victory in the $150,500 Generous Portion Stakes for 2-year-old California-bred fillies at Del Mar.

She remains far from her potential, trainer Phil D’Amato said.

“This filly has a lot of upside to her,” D’Amato said.

Ridden by Joe Talamo, Long Hot Summer ($12.40) closed from sixth in a field of eight to win the six-furlong Generous Portion Stakes by three-quarters of a length over 5-2 My Fiona. Lost Bus, the 2-1 favorite, fought with My Fiona through the stretch and finished a nose behind the runner-up.

Long Hot Summer rallied outside of My Fiona and Lost Bus in the final sixteenth and was timed in 1:10.94. She trailed by three lengths on the backstretch and was third with a furlong remaining, 1 1/2 lengths behind stretch leader My Fiona.

“She was dragging me the whole way,” Talamo said. “The two in front were definitely running.”

Desert Steel, the 3-1 morning-line favorite, and Do the Danse were scratched Wednesday morning. Trainer Simon Callaghan said that Desert Steel sustained “a minor setback” and will be pointed for the Santa Anita autumn meeting.

“She’s got a good mind to her,” D’Amato said. “Joe had to ride her a couple of times, and she took off. I think the longer, the better.”