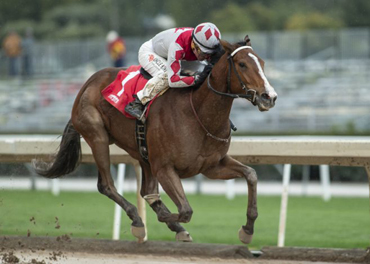 By Santa Anita Publicity
ARCADIA, Calif. (Feb. 10, 2019)–A California-bred daughter of Unusual Heat, KMN Racing’s homebred Apache Princess relished a change in surface from Santa Anita’s hillside turf course to 6 ½ furlongs on a sloppy main track as she rallied up the rail to take the $100,000 Sweet Life Stakes by 3 ¼ lengths. Trained by Keith Desormeaux and ridden by his Hall of Fame brother Kent, Apache Princess got the distance in 1:16.82 despite the fact Kent dropped his stick inside the furlong pole.

“That’s embarrassing, but (it’s) the second time I’ve done that with her and she’s won the race for me,” said Kent. “She proves that she doesn’t need it, she just needs encouragement with my mouth. If I kiss at her, shake the reins at her, throw crosses and she continues…”

A maiden winner down the hillside turf two starts back and a 3 ½ length allowance winner over the hillside course on Jan. 21, Apache Princess was off as the 6-5 favorite in a field of five sophomore fillies and paid $4.60, $2.60 and $2.40.

Out of KMN Racing’s Indian Charlie mare Puskita, Apache Princess, who became the first three-time winner at the meet, now has three wins from six starts and with the winner’s share of $60,000, increased her earnings to $171,960.

English-bred Thriving, who was head and head for the early lead with eventual fourth place finisher Nomizar, was off at 9-2 and paid $3.80 and $2.60 while finishing a nose in front of Splashy Kisses.

Ridden by Heriberto Figueroa, Splashy Kisses was off at 2-1 and paid $2.40 to show.

Originally a Grade III on turf, today’s Sweet Life Stakes result will be evaluated by the American Graded Stakes Committee in the coming days to determine if today’s race will retain its graded status.

With the surface changed announced prior to today’s fifth race, there was one late scratch out of the Sweet Life, Irish-bred Ginger Nut, a turf specialist, who was to have made her U.S. debut for trainer John Sadler.