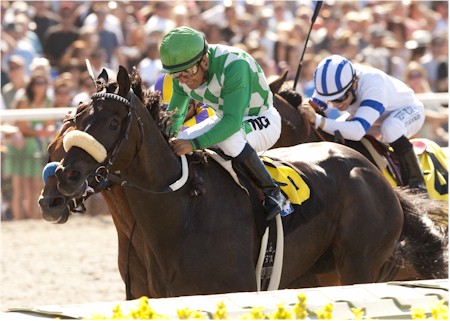 John Scott ($6) raced wide through much of the race. He led by a length with a furlong remaining and was fully extended to win.

“He wants to wait on horses when he makes the lead,” Espinoza said. “It was tough today.”

Kettle Corn, the winner of the Grade 3 Native Diver Handicap at Hollywood Park last December, raced in traffic in early stretch and closed well to just miss. Kettle Corn was the 9-5 favorite.

“He had every chance to go by that horse,” Kettle Corn’s jockey, Garrett Gomez, said. “Maybe if I had a little longer to do it, I would have had a better chance.”

John Scott and Kettle Corn were second and third in the Grade 2 San Diego Handicap here on July 28. Both were mentioned as candidates for the $1 million Pacific Classic on Aug. 26 in the days before the race.

Plagued by minor injuries for much of his career, the 5-year-old John Scott returned to racing after a 30-month break earlier this year. The Brubaker was his fifth start of the year and third win.

Bred by owner Harris Farms and Scott Gross and trained by Carla Gaines, John Scott has won 5 of 8 starts and $301,304.