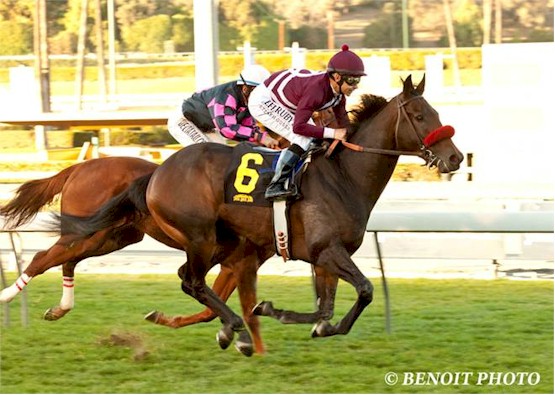 Trained by Marty Jones and bred in California by his owner, Pamela Ziebarth, a 4-year-old gelding by Tizbud, notched his third win in his sixth career start and paid $3.60, $2.80 and $2.10.

“I’ll talk it over with Pam and chances are that we’ll stay on the turf,” said Jones. “He’s been real nice coming down the hill and there’s a race on February 22, the Sensational Star…There’s a chance we’ll run in there if everything goes well.”

Although he opened up five lengths early, setting fast fractions of 21.58, 43.45 and 1:05.50, Rangi, ridden by Victor Espinoza, dug in gamely at the rail when headed three sixteenths of a mile from home and stretched the winner all the way to the wire while finishing 2 ¼ lengths in front of 3-1 second choice Kochees and Rafael Bejarano.

“He got the job done,” said Smith.  “He still has a little ‘play’ in him. He gets to that last horse and he tends to hang on them a bit.  He’ll lay on them, especially if he’s on the outside…You just worry about someone coming on his outside when he’s doing stuff like that.”

Far back early, Kochees rallied through the lane but was no threat to the top two. He paid $2.80 to show.
from SantaAnita.com