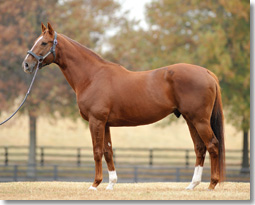 Harris Farms’ multiple graded stakes-winning stallion Heatseeker was euthanized Dec. 27 at the Veterinary Teaching Hospital at the University of California-Davis after he was discovered in his paddock with a broken left femur.

The 13-year-old son of Giant’s Causeway  began his stud career in 2009 at Hill ‘n’ Dale Farms in Central Kentucky before relocating to Harris Farms near Coalinga, Calif., for the 2012 breeding season. He stood for $5,000 this year.

Richard Barnes bred Heatseeker in Ireland and raced him as a juvenile, winning twice and placing in the group I Laing O’Rourke National Stakes at The Curragh. The horse would change owners a couple times before being sold privately in the late summer of 2007 to William deBurgh, who sent the horse to trainer Jerry Hollendorfer.

With Hollendorfer, Heatseeker won his first U.S. graded stakes Dec. 8 in the grade III Native Diver. The horse would go on to blossom at 5, starting only in graded stakes and never finishing out of the money in five starts in 2008. His peak achievement was a three-quarters length victory in the Santa Anita Handicap (gr. I) over a full field of 14 that included graded stakes winners Monterey Jazz, Tiago, Student Council, and Champs Elysees.

As a sire, Heatseeker would deliver nine black-type stakes winners and a champion. His top runners included Ryans Charm, who won Peru’s Clasico Pamplona (Per-I) back-to-back in 2015 and 2016. The mare was named the champion grass mare in Peru in 2015. In North America, Heatseeker was represented by graded stakes winner Speed Seeker, winner of the Ontario Colleen Stakes (Can-III) and multiple stakes winner Surtsey. His leading earner of 2016 has been Catholic Cowboy, who has earned $461,489, and 2-year-old stakes winner Isa Firecracker. From five crops to race, his progeny have earned $5,957,191 to date.