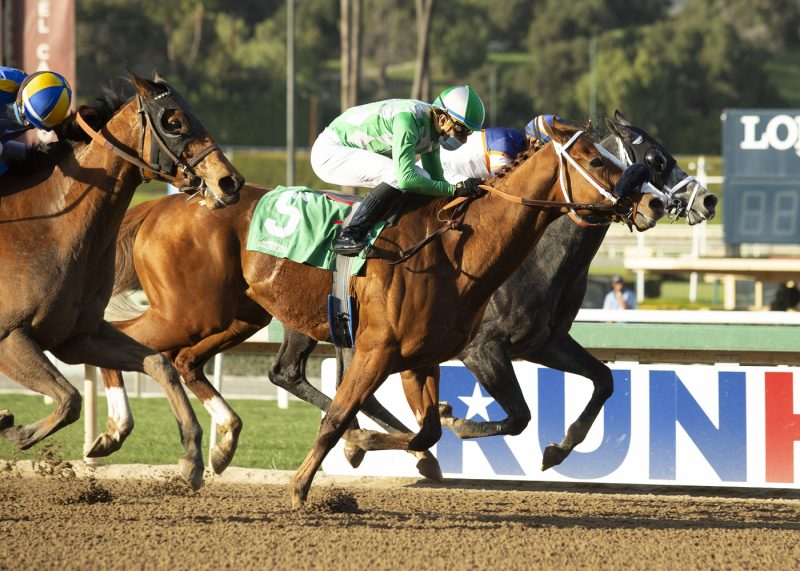 Courtesy of Santa Anita.com ARCADIA, Calif. (Feb. 28, 2021)–In a race in which the emphasis was on speed, speed and more speed, Harris Farms’ hard knocking Fashionably Fast proved gamest of all, as he dug deep while in between horses late to win Sunday’s $100,000 Tiznow Stakes at Santa Anita by a head. Trained by Dean Pederson and ridden by Tiago Pereira, FashionablyFast, a 6-year-old California-bred gelding by Lucky Pulpit, got a flat mile in 1:37.14 while taking the Tiznow for the second consecutive year.

Breaking from the outside in a field of five, Fashionably Fast was part of a four-horse scramble for the lead, as recent allowance winner Desmond Doss had a head advantage over Margot’s Boy, with Surfing Star just a half length in front of the winner, who was hung four-wide around the clubhouse turn.

Heading to the far turn, Fashionably Fast moved into second, a half length back of Desmond Doss and these two traded punches to the sixteenth pole, where they were joined by a late running Brandothebartender, but in the end, Fashionably Fast simply wouldn’t be denied.

“This horse has so much heart, mucho corazon!” said Pereira, who has now ridden Fashionably Fast in 19 out of his 20 starts and in all eight of his victories. “None of these races are easy, but he tries so hard. Today, we were wide going into the first turn, but he’s got so much speed and I didn’t want to take too much hold of him. He relaxed a little down the backside and when we were between the number one (Desmond Doss) and the number three (Brandothebartender), he gave everything.”

“I wasn’t too worried about him being wide,” said Pederson. “He’s in the clear and he was on the bridle for Tiago, which was important. I was a little worried when he got a little keen up the backside, but you (could) tell at the three-eighth pole we had no excuse. He doesn’t make (anything) easy, he’s just a very game horse. I almost feel more confident when he’s tucked in a battle like that than when he’s out there by himself. But then at that point, you either win or you lose and you just hope for the best. Good horses make it easy.”