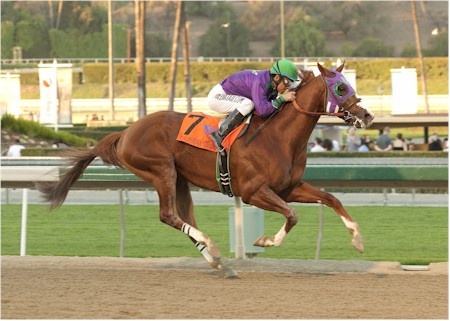 Knocking At The Door
by Steve Haskin BloodHorse.com

February 5, 2014-It sounds odd saying this, but three of the most impressive 3-year-olds I’ve seen this year have been a California-bred and two New York-breds. I wanted very much to put CALIFORNIA CHROME (Lucky Pulpit) in the Top 12, but I can’t justify taking someone off this quickly, and I need more space to write about him, so let’s consider him No. 13 for now, and not knocking, but pounding on the door.

I have not seen a 3-year-old this year more impressive than this colt. I watched all his races and loved everything I saw, especially the visual improvement in his last two starts – whether they were against Cal-breds or not. First off, forget about him being a Cal-bred. In the Cal Cup Derby he demolished a top-class horse in Tamarando, who had won a grade I and placed in two others and is one of the most consistent horses in the country and an explosive stretch runner.

In that race, California Chrome was caught looking to his left at the break and stumbled slightly, breaking awkwardly and bearing out and bumping with the outside horse. After going a bit wide into the first turn, he settled beautifully in third, and then at the five-sixteenths pole he unleashed an impressive turn of foot all on his own without being asked even slightly. He inhaled the leaders in a flash and cruised to the lead with Victor Espinoza already looking back several times, then changed leads smoothly and on cue and drew off on his own. This horse is so smooth and has such a long fluid stride and levels off so beautifully he is a joy to watch. Tamarando made his typical late run, drawing 3 1/4 lengths clear of the pack, but could not make a dent in California Chrome’s lead. C.C. covered his fourth quarter, going from two lengths back to 5 1/2 in front in :24 1/5 before cruising home, throwing his ears around, in :06 2/5.

In his previous start, the King Glorious, you couldn’t have asked a horse to run any straighter down the stretch. He accelerates on his own at the right time, nearing the head of the stretch, and for a long-striding horse his lead changes are so smooth you can barely see him do it.

As for his two prior defeats, in the Del Mar Futurity he got shuffled back around the turn and was stuck in traffic with nowhere to go, losing valuable ground. In the stretch, he again was in tight quarters and the way he threw his head out so abruptly, he had to have gotten hit across the face with the whip of the jock inside him. He still was beaten only two lengths by Tamarando.

In the Golden State Juvenile, he broke from the rail and leaped in the air at the start, dropping back to last. He then got very rank and quickly passed horses, getting as close as third. He had his head up in the air turning for home and never really leveled off until it was way too late. This time, he was beaten three lengths.

Earlier on, in his last race before getting Lasix, the 5 1/2-furlong Willard Proctor Memorial at Hollywood Park, he got caught up in a three-horse speed duel through a torrid opening quarter in :22 flat and that is not his style at all.

This horse has already won at 4 1/2 furlongs, 5 1/2 furlongs, seven furlongs, and 1 1/16 miles and runs like he’s just getting started. His sire, Lucky Pulpit, is by Pulpit, out of a Cozzene mare, and what I love the most about his pedigree is that his dam is inbred (Rasmussen Factor) to the great Numbered Account (a daughter of Buckpasser) through her daughter Dance Number and son Polish Numbers. And his third dam is by English Derby and Washington D.C. International winner Sir Ivor.

I may be getting too high on this colt, and am drawn to him because he’s run eight times already and is trained by an old-school trainer in Art Sherman, but I do love everything about him and can’t wait to see him face many of California’s top Derby contenders in the San Felipe.