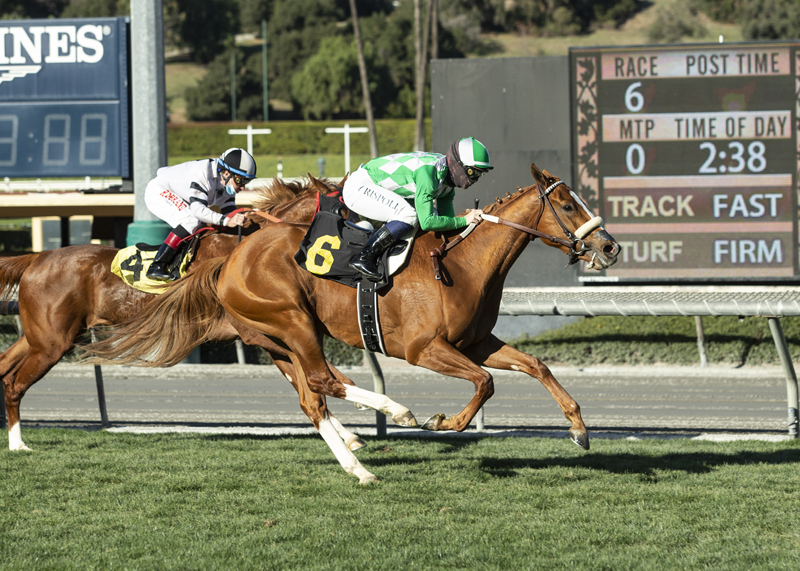 Courtesy of Santa Anita ARCADIA, CA (Jan. 16, 2021) – With a nightmarish trip in her last start behind her, Harris Farms’ homebred Closing Remarks powered to an impressive one length win in Saturday’s $200,000 Leigh Ann Howard California Cup Oaks at Santa Anita. One of three fillies in the field trained by Carla Gaines, Closing Remarks was ridden by Umberto Rispoli and covered one mile on turf in 1:35.62.

Named for the longtime owner/breeder and trainer who passed away this past Sept. 3 at 79, the Leigh Ann Howard Cal Cup Oaks is part of the CTBA’s lucrative Golden State Series for eligible California-bred or sired three year old fillies.

Full of run with nowhere to go turning for home in the Grade III Jimmy Durante Stakes going a mile on turf at Del Mar Nov. 28, Closing Remarks, in her fourth career start, was off as the 5-2 second choice in a field of 10 sophomore fillies and paid $7.80, $4.40 and $3.60.

We had quite a bit of confidence, just hoping she would get a cleaner trip this time, and that worked out well,” said winning trainer Carla Gaines. “This is one of the best cards on Cal Cup Day we’ve seen in a long, long time,” she continued. “We keep expressing to the Management and the Racing Office how important the Cal-breds are here and this is a great indication.”

“It was nice to have a clean trip today. My trip today was fantastic” said winning rider Umberto Rispoli. “The speed was on, and she was happy where she was. I was traveling and waiting for the stretch because I felt that they went pretty fast in the front. I knew she was ready, and who the target was this race. Carla does an amazing job, and fortunately we didn’t get stopped today.”

By Vronsky, out of the Unusual Heat mare Orange Cove, Closing Remarks notched her first stakes win and her second win from four overall starts. With the winner’s share of $110,000, she increased her earnings to $149,500. 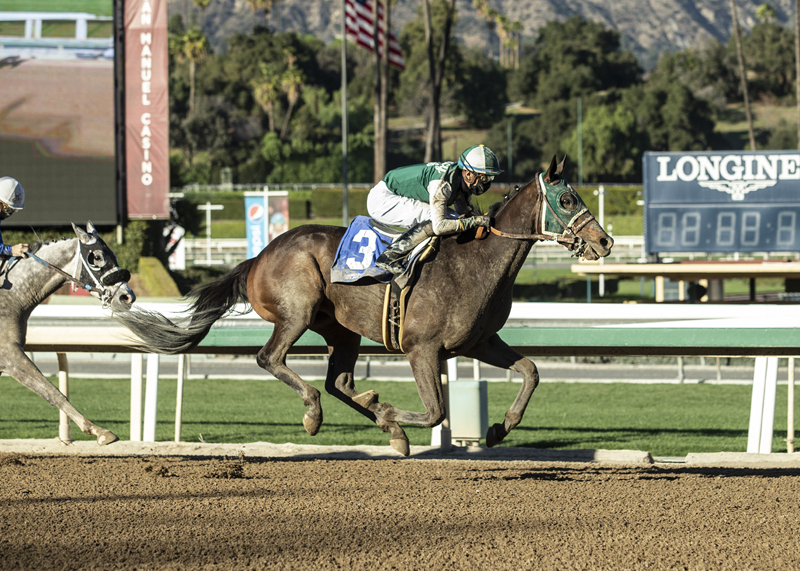 A joint sixth, about four lengths off the lead going into the far turn, Hernandez bided his time, angled outside three sixteenths from home and Big Fish unleashed a powerful stretch kick to run down None Above the Law in the final sixteenth.

Fourth in the one mile turf Eddie Logan Stakes here on Dec. 27, Big Fish, a 3-year-old gelding by Mr. Big out of the Into Mischief mare Perched, had been on turf and faced open company in his last four races, with both of his wins coming on the grass.

A one mile turf stakes winner in his fourth start on Sept. 7 at Del Mar, he now has added money victories on both surfaces. With the winner’s share of $110,000, Big Fish increased his earnings to $229,018.

There were plenty of runners on California Cup Day with connections to Harris Farms that turned in noteworthy performances that could not go unmentioned.

Burnin Turf, the son of Acclamation out of the Vronsky mare Hot Outta the Oven, earned his maiden special weight diploma in the 2nd race on the card. He was bred by Old English Rancho and races for the partnership of Next Wave Racing and The Ellwood Johnston Trust.

Nardini, the daughter of Acclamation, out of the Tribal Rule mare, Ismene, finished second in the $152,000 Sunshine Millions Filly and Mare Turf Sprint. Bred by Stephen Ferraro, she races for Legacy Ranch, Inc.

Acclamation’s big day continued with sons Heck Yeah and Acclimate finishing 2-3 in the $201,500 Unusual Heat Turf Classic Stakes. Heck Yeah is out of the Maria’s Mon mare, Lutess. Bred by Michael Pageler, he races for Robert Baedeker, Constance Ann Pageler, and Michael Sigband. Acclimate was produced by the Boundary mare, Know No Bounds. He was bred by Old English Rancho & Sal and Patsy Berumen and races for The Ellwood Johnston Trust, Timmy Time Racing and Ken Tevelde. Ward ‘n Jerry, the Lucky Pulpit son who is a half-brother to Harris Farms stallion Tamarando, finished fourth.

The final stakes on the day, the $153,000 Don Valpredo California Cup Sprint Stakes, saw Tigre Di Slugo and Fashionably Fast finish second and third. Tigre Di Slugo is by Smiling Tiger, out of the Williamstown mare, Erica’s Smile. He was bred by Premier Thoroughbreds and races for Slugo Racing, Tiger Racing, Inc., and Mike Puype. Harris Farms homebred Fashionably Fast is a son Lucky Pulpit, out of the Forestry mare Fall Fashion. 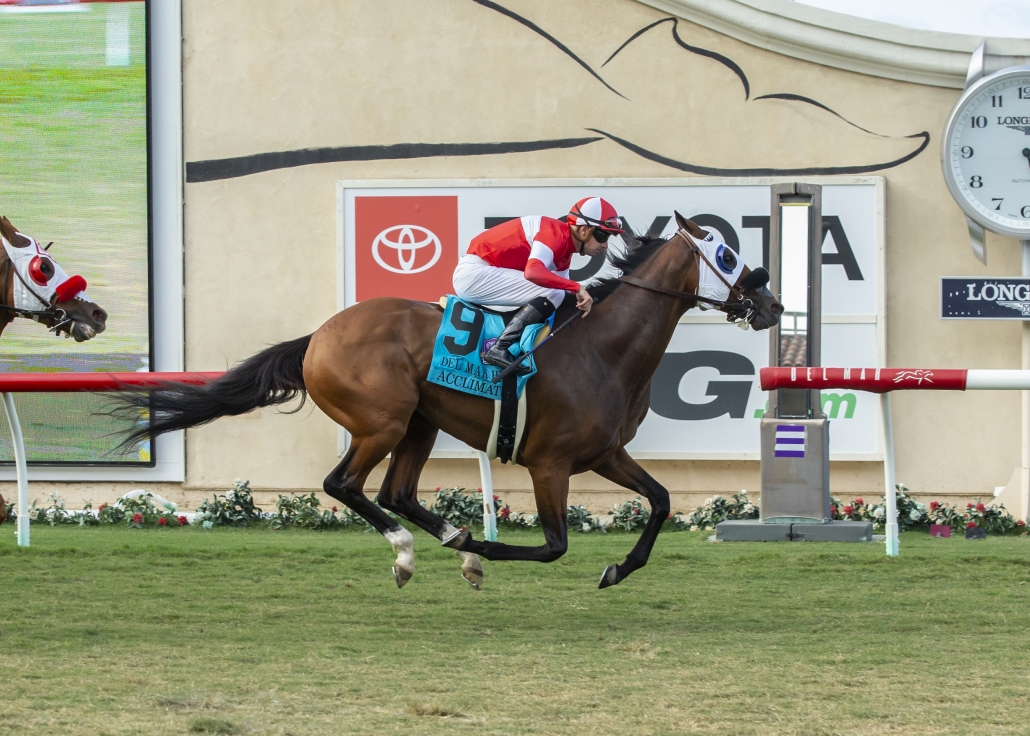 Complimenting those stakes is the $200,000 California Cup Derby for 3-year-olds, in which The Chosen Vron, a runaway winner of his debut Dec. 27 at Santa Anita, takes on more seasoned foes while stretching out to 1 1/16 miles.

The California Cup Derby and its sister race, the $200,000 Leigh Ann Howard California Cup Oaks at a mile on turf, will be contested with treatment of Lasix prohibited. The diuretic—used to control respiratory bleeding in horses but being phased out in some jurisdictions, including California—is permitted in the three stakes for older California-breds, the last of which is the $150,000 Don Valpredo California Cup Sprint. All but one of Saturday’s older stakes competitors will race with Lasix.

Acclimate, a close fourth after a layoff of more than a year in the Hollywood Turf Cup Stakes (G2T) Nov. 27 at Del Mar, is the probable favorite. The speedy 7-year-old gelded son of Acclamation won the Del Mar Handicap Presented by the Japan Racing Association (G2T) in 2019 and was later second in the John Henry Turf Championship Stakes (G2T) and ninth in the Longines Breeders’ Cup Turf (G1T) that year.

Earlier in 2019, he won the San Juan Capistrano Stakes (G3T) at Santa Anita.

Tyler Baze is aboard the frontrunner for trainer Phil D’Amato and owners The Ellwood Johnston Trust, Timmy Time Racing, and Ken Tevelde.

Acclimate appears to have caught a field with an above-average amount of pace for a 1 1/8-mile turf race.

Sponsored by the CTBA, the California Cup Derby, which is one of five Cal Cup Day Stakes on Saturday, is part of the lucrative Golden State Series for eligible California-bred or sired three-year-olds. The Cal Cup Derby, originally run in 1990, was won by eventual two-time Horse of the Year California Chrome in 2014.

A chestnut gelding by Vronsky out of the Tiz Wonderful mare Tiz Molly, The Chosen Vron was off as the 2-1 favorite with John Velazquez on Dec. 27 and never looked a loser in an impressive front-running effort that resulted in a 6 ¾ length win and a lofty 86 Beyer Speed figure. With Velazquez back at his Gulfstream Park base, Joel Rosario will take over on Saturday as The Chosen Vron stretches out to a mile and one sixteenth in his second start.

Arcadia, CA (January 8, 2021) – Discretionary Day took advantage of a nimble start to take the opener on the card at Santa Anita, a maiden special weight going one mile over the firm turf course.

Showing good speed away from the gate, the 3-year-old Acclamation colt was able to take up the rail position from post seven. He set a lively pace of 23.23 and 46.98 while opening up a length and one-half on the field. The field closed in as he passed six furlongs in 1:11.85. He looked like he would be swallowed up, but there was a lot more in the tank. Jockey Mike Smith asked at the top of the stretch and he responded with a quick turn of foot that reestablished his lead. They would not get any closer and he came home best by a length and one quarter in a final time of 1:36.50.

Discretionary Day is a homebred racing for Don Valpredo and he is trained by Jeff Bonde. He was produced by the winning Gone West mare, Westline.

Arcadia, CA (December 27, 2020) – The Chosen Vron made a blockbuster career debut, blowing away the field by nearly seven lengths in the 8th race at Santa Anita, a maiden special weight going six and one-half furlongs over the fast main track.

The 2-year-old son of Vronsky was no secret with a swift worktab leading up to today’s start. He broke sharply and wentstraight to the lead. Being kept company, he zipped an opening quarter in 21.94 and the half in 45.72. At the top of thestretch, jockey John Velasquez asked him to finish and away he went. He opened up with every stride, passing six furlongsin 1:10.66 and finishing up the journey in 1:16.74.

The Chosen Vron races for the partnership of his trainer Eric Kruljac, Robert Fetkin, John Sondereker, and Richard Thornburgh. Foaled and raised at Harris Farms, he was produced by the winning Tiz Wonderful mare, Tiz Molly. He was bred in California by the Tiz Molly Partners.

Arcadia, CA (December 27, 2020) – The first horse with Harris Farms’ connections to visit the winner’s circle on the Santa Anita card was Cassie Belle, the Lucky Pulpit filly who capture the 1st race, a $64,500 allowance over the firm turf course.

Eight fillies lined up for the one mile event. Cassie Belle settled into a stalking position in second for the first six furlongs. She moved to the leader at the top of the stretch, cleared the field and came home best by one and three-quarters lengths.

A homebred racing for Oakcrest Stable, Cassie Belle was produced by the winning Unusual Heat mare, Madame Heat. Trained by Sean McCarthy, the victory takes her lifetime bankroll up to $129,085.

California’s Leading First Crop Sire Majestic Harbor has a brand new television commercial. He is the sire of four maiden special weight winners from seven starters and 28.6% black-type horses to runners. He stands the 2021 season for $2,500 Live Foal. 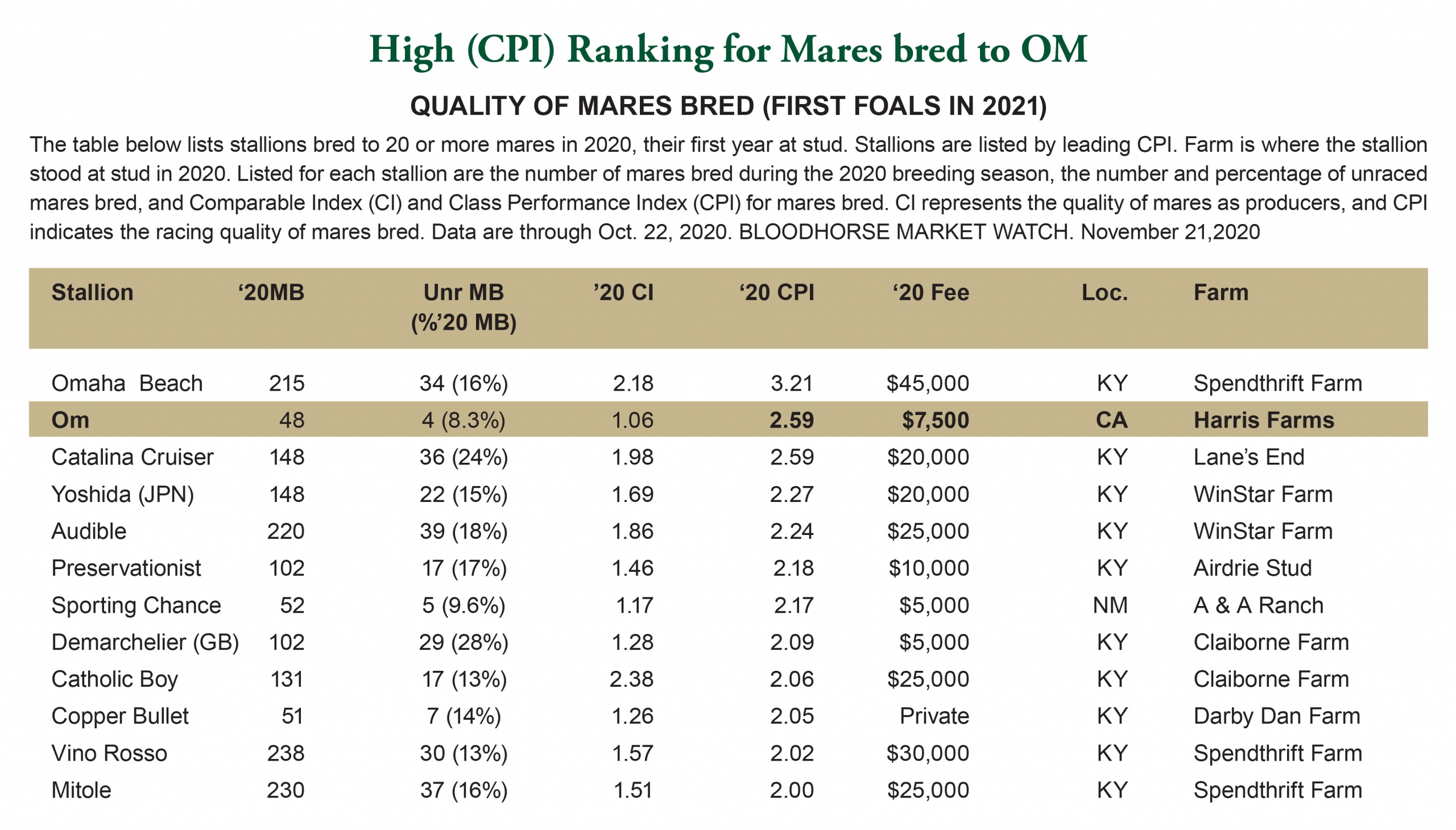