Arcadia, CA (May 22, 2020) – Take the One O One, the multiple stakes winning son of Acclamation, took the field on a merry gallop to win the 8th race on today’s card at Santa Anita, a one mile turf allowance with a purse of $51,000.

Hustled out of the gate by jockey Jose Valdivia, Jr., Take the One O One established a clear lead through the opening quarter. Halfway through, he felt some pressure from two different challengers, but he shook them off and was leading by three at the top of the stretch. He was kept to his business the rest of the way home, but not seriously threatened, in his length and one-half victory.

The 5-year-old Brian Koriner trainee has won or placed in nine of his thirteen starts and has earned $382,306 for owner Jay Em Ess Stable. Bred by Thomas Backman in California, he was produced by the multiple stakes producing Jump Start mare, North Freeway.

Trained by Jeff Bonde, the 3-year-old daughter of Smiling Tiger got six furlongs in 1:10.49, which was .26 of a second slower than Big Sweep’s final clocking in the Evening Jewel’s counterpart, the Echo Eddie, run two races earlier.

Sponsored by the CTBA, the Evening Jewel is part of the lucrative Golden State Series for eligible California-bred or sired horses.

A one-mile state-bred allowance winner on March 6, Smiling Shirlee, who is owned by Edward Brown, Jr., Alan Klein and Phillip Lebherz, had been Cal-bred stakes-placed on three occasions and notched her first stakes victory today in her eighth career start.

“What a race she ran,” said Smith, who was aboard for the first time today. “I thought that if she ran back to her last race, she’d be hard to beat today. The two (Bella Vita) ran a big race but my filly dug in and got the job done.”

Bred in California by Premier Thoroughbreds, LLC, Smiling Shirlee, who is out the Grand Slam mare Whobetterthanus, bagged $90,000 for the win, increasing her earnings to $239,220 and her overall mark to 8: 3-2-1.

Ridden by Umberto Rispoli, Bella Vita sat second around the turn, was three-deep at the top of the lane and finished second while besting Been Studying Her by one length. Off at 7-1, Bella Vita paid $7.60 and $5.20.

Off at 9-2 with Flavien Prat, Been Studying Her paid $4.00 while finishing 1 ¾ lengths in front of Warren’s Showtime, who had to wait for racing room turning for home.

Arcadia, CA (May 16, 2020) – The second day back to racing at Santa Anita Park produced a sharp performance from Songofthedesert. The 5-year-old daughter of Desert Code made it look easy in the 2nd race, a $51,000 allowance going five and one-half furlongs over the fast main track.

Breaking from post two, Songofthedesert had plenty of speed to lay claim to the inside run while sitting off the pair dueling for the lead. She quickly moved to the front going into the far turn and raced away from the rest of the field. She was all alone through the stretch and crossed under the wire best by four and one-half lengths.

Bred in California by Oakcrest Stable, she was produced by the Tale of the Cat mare, Unchanged Melody. She races for Johnny Taboada and she is trained by Jonathan Wong.

Arcadia, CA (May 15, 2020) – Harris Farm’s homebred Civil Suit blew the field away in her first start over the main track to break her maiden by nearly fourteen lengths in the 7th race as racing resumed at Santa Anita Park.

The 4-year-old filly had made her first two starts sprinting on the turf, finishing third on debut. Switched to the main track today, the daughter of Lucky Pulpit relished the surface change. She dashed away at the start and dueled for and gained the lead shortly after the opening quarter. Opening up by three and one-half lengths passing the quarter pole, jockey Assael Espinoza encouraged the blazed-face bay and she was eight lengths in front by mid-stretch. The margin increased again by nearly double in the final furlong as she galloped past the wire.

Trained by Dan Blacker, Civil Suit was produced by the winning Tiznow mare, Sioux Zen. Her dam foaled her half-brother on April 12 by Acclimation at Harris Farms. Her granddam is the multiple G1-winner Dispute.

Albany, CA (May 15, 2020) – The second horse with Harris Farms connections to win on the Golden Gate card was Don’t Unzip Me. The 3-year-old filly earned her maiden special weight win in the 3rd race going one mile over the firm turf course by a length and one-half.

To see the pictorial of Don’t Unzip Me’s half-brother by Lord Nelson that was foaled this season at Harris Farms, click here.

Albany, CA (May 15, 2020) – Rousing Sermon son Slam Dunk Sermon made it two wins in four starts with his victory in the 2nd race at Golden Gate Fields, a five and one-half furlong allowance over the all weather surface.

Making his second start against winner, the 3-year-old gelding was away alertly. The prevailing speed was to his outside, giving him the ground saving inside trip down the backstretch and around the turn. Full of run, he moved off the rail and split horses with a furlong to run. He caught the leaders and drew away with plenty left to win going away by two lengths.

Slam Dunk Sermon is a homebred racing for Larry D. Williams. Produced by the Grand Slam mare, Royal Grand Slam, he is trained by Steven Specht.

One of the area’s most devoted racing fans and boosters passed away in late April—Ardie Der Manouel. Ardie was instrumental in making and keeping the Big Fresno Fair the most successful and popular racing fair in California. He will be deeply missed, but his legendary spirit will live on. Harris Farms has reserved the name, Ardie the Legend for a promising 2-year-old. Ardie is shown here with California Chrome and John Alkire, General Manager of the Big Fresno Fair. 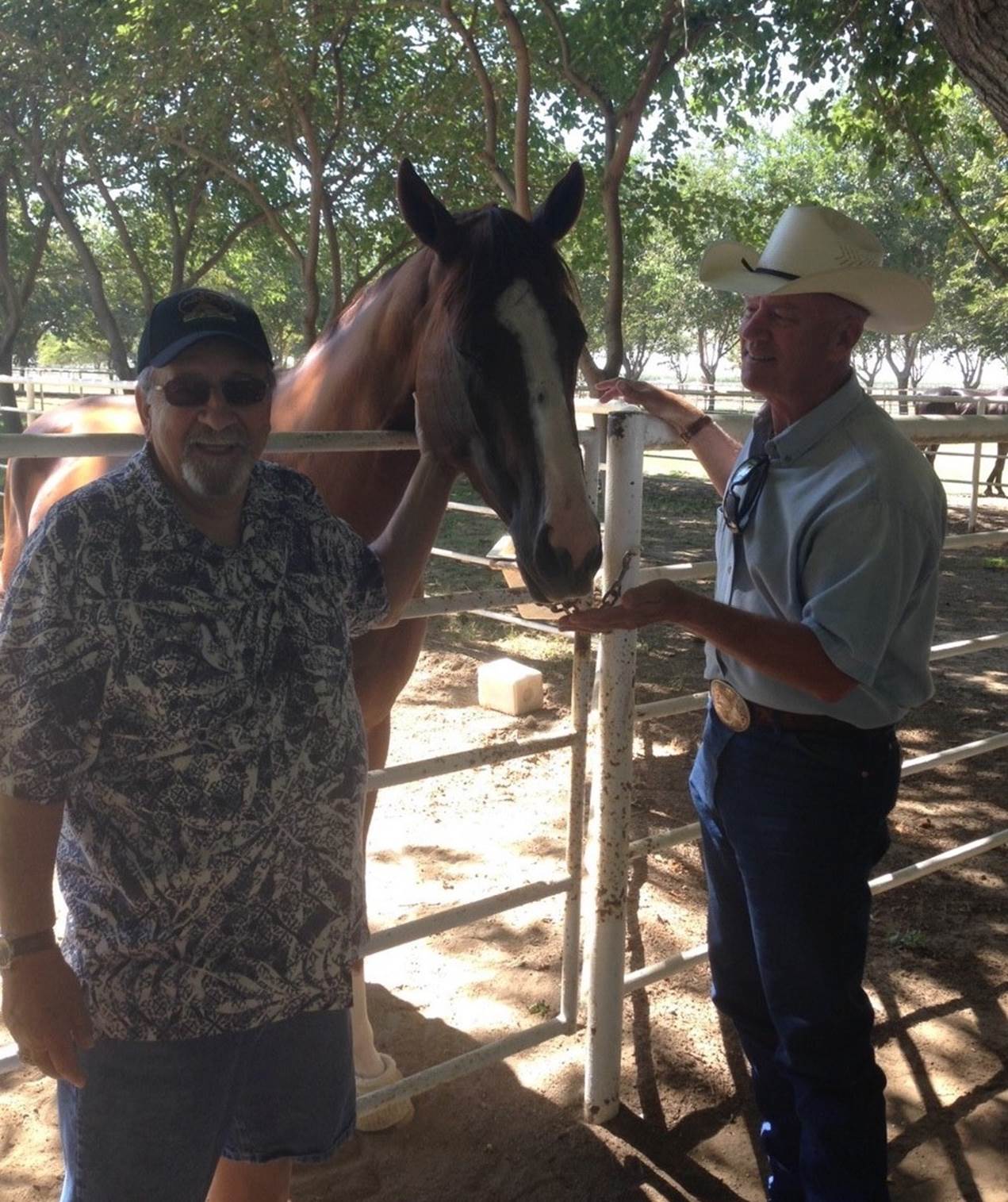 Coalinga, CA (March 20, 2020) -The Harris Farms’ top priority is the health and safety of our employees, customers, and communities where we work. When faced with decisions and business practices that mayimpact health and safety, we always proceed with an abundance of caution and we remainvigilant in this dedication throughout the unfolding impact and health concerns of COVID-19 (coronavirus).

Our customers and industry partners are a key part of our critical business activities and we are committed to all of you who share in our purpose as we contribute to feeding our world. In these uncertain times, that purpose is more important than ever, and we are here to support the critical work of our customers and the entire agriculture and food industry. As the COVID-19 issue continues to impact our communities, we want to let you know what we’re doing to ensure our continued service, health, and safety.

We are closely monitoring the World Health Organization (WHO), the Centers for DiseaseControl and Prevention (CDC), and local health agencies for the latest developments related to COVID-19 and following the guidance of government and public health officials. We are reinforcing these agencies’ recommendations by introducing proactive social distancing and other precautionary efforts.

To handle the ongoing impact of this situation and continue to meet your needs, we have deployed a cross-functional team responsible for ensuring our business continuity protocols address agency guidance and best practices related to COVID-19. This includes building and revising action plans and communications to meet frequently changing needs, and planning for future scenarios.

If you have any questions or concerns please e-mail.

For a pdf copy of this letter, please click here

A NOTICE TO OUR VALUED CLIENTS:

Coalinga, CA (March 19, 2020) – Due to importance of trying to reduce the spread of COVID-19, and in an effort to keep our employees healthy, we at Harris Farms are currently not allowing visitors and restricting access to farm personal only. We are however still open for breeding, foaling and training. Thank you all for understanding and we look forward to this situation resolving and welcoming you back to Harris Farms.

Below is the time of appearance of each stallion: