Del Mar, CA (August 7, 2022) – Thorne House, a Harris Farms homebred who was the runner-up in his first start on June 5 at Santa Anita, went one better second time out with his victory today in the 4th race at Del Mar going six furlongs over the fast main track.

After a bit of bumper cars at the break, Thorne House quickly took out to set the pace through a zippy opening quarter of 21.90. He maintained her half-length advantage after a half in 45.22. Jockey Abel Cedillo asked and he found another gear. He quickly quadrupled his lead in a few quick strides and maintained it to the wire. He finished the journey in 1:09.96.

Thorne House races for Harris Farms, Inc. and Slugo Racing, the gelded son of Clubhouse Ride is trained by Doug Peterson. His dam is the winning Thorn Song mare, Secret Thorn, who also was bred by Harris Farms.

Del Mar, CA (August 6, 2022) – The 3rd race on the Del Mar card was six furlong allowance with a purse of $99,286 and Smiling Tiger filly Taming the Tiger came home with the winner’s share of the pot.

Taming the Tigress was away cleanly in the six furlong affair over the main track. She found her spot midpack as the field ran down the backstretch. She moved into contention around the turn and despite being fanned out to the five path, she was even with the leaders at the top of the stretch. There were still four in the hunt and a battle ensued. Taming the Tigress continued on to the finish resolutely, proving best inside the final sixteenth to win by a length.

Taming the Tigress has won or placed in ten of her fourteen career starts and she has earned $248,762 for the partnership of CYBT, Michael Nentwig, Ray Pagano, and Daniel Weiner. Bred in California by Highlander Racing Stable, LLC, she was produced by the winning Yes It’s True mare, Joeandbetty’sbaby.

Both of the Acclamation runners made their debuts on the main track at Pleasanton and were switched to the turf at Del Mar for their second outing. Callhercontessa went straight to the front and let through some sharp early fractions of 22.40, 46.54, and 1:11.22. The field began to close up as she came off the final turn, but she found all the extra she need through the stretch to win by two and one-quarter lengths. Her final time was 1:36.07.

Callhercontessa is a homebred racing for Ron Rand and Courtney Rand. She was produced by the Cyclotron mare, Eden Mirelle.

Del Mar, CA (July 29, 2022) – The racing card at Del Mar on this Friday afternoon opened with a maiden contest for state-bred 2-year-old fillies and Yo Yo Mama became the second winner for Freshman Sire Conquest Farenheit.

The Harris Farms foaled, raised, and sold filly had on her running shoes from the gate. She pressed the pacesetter as the two opened up a half-dozen lengths on the rest of the field down the backstretch and around the turn. The two continued to battle in the stretch, with Yo Yo Mama taking over inside the final furlong and holding off a new challenge in the closing strides to win by a head.

Yo Yo Mama races for the partnership of Edward Rusty Brown, Alan Klein, and Philip Lebherz and she is trained by Brian Koriner. Bred by Rockingham Ranch, she is out of the winning Biodetti mare, Te Amo Mamo.

To see a foal photo of Yo Yo Mama, click here.

Del Mar, CA (July 28, 2022) – Kings River Knight, who missed victory in his racing debut going six furlongs over the main track on June 26 by a half-length, switched surface and distance to earn his maiden special weight diploma in the 8th race at Del Mar.

The son of Acclamation drew the outside post in the field of eleven going one mile on the turf.. He did not break particularly well, but his natural speed carried him to the lead going into the first turn. He galloped along through an opening quarter in :23.12 and he continued to rate kindly for jockey Umberto Rispoli through a half in 48.08 and the pair hit six furlongs in 1:12.63. Rispoli asked him to finish and he laid down two eleven and change furlongs to draw away from the field and win by two and one-half lengths. Final time was 1:36.25.

Kings River Knight was bred by Old English Rancho and he was produced by the graded stakes-placed Pleasantly Perfect mare, Pamona Ball. He races for the partnership of The Ellwood Johnston Trust and Ken Tevelde and he is trained by Andy Mathis. 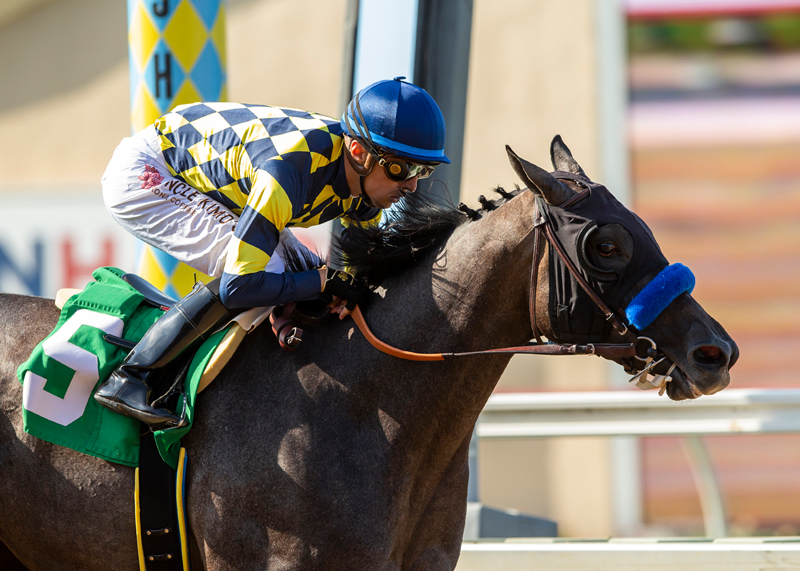 Del Mar, CA (July 28, 2020) – Fun to Dream is following in the footsteps of her multiple stakes-winning half-brother Heck Yeah (Acclamation), remaining undefeated and becoming a stakes winner next out as she dominated the field in the $175,000Fleet Treat Stakes going seven furlongs over the fast main track at Del Mar.

The 3-year-old California-bred daughter of Arrogate, who was foaled and raised at Harris Farms, was the even money favorite to defeat the five others fillies chasing the $99,750 winner’s share of the purse. There was bumping away from the gate, but Fun to Dream moved past the early jostling and took up an outside stalking position down the backstretch. Jockey Juan Hernandez asked three furlongs from home and she answered. Taking the lead in just a few strides, she ran away from the field through the stretch to win by nearly ten lengths. Final time was 1:22.67.

“Bob (trainer Baffert) told me she had really been training good,” said winning jockey Hernandez. “He said that one filly inside you has a lot of speed, so see what she does and follow her. Then go from there. That’s just how it went. When I asked my filly, she went. Changed leads perfect; it was all good. She’s fast and she was a winner today.”

“We knew that 3 (Opening Buzz) looked really impressive on paper and really fast, so he was in a good spot, we sat off of her patiently,” said Baffert. “It was her second out; hopefully we’ll try her in some open company.”

Fun to Dream was bred by Connie Pageler and Bob Baffert and she races for Pageler and Natalie J. (Jill) Baffert. Fun to Dream and Heck Yeah were produced by the winning Maria’s Mon mare, Lutess. The mare has produced colts in 2021 and 2022 by Smiling Tiger. Both were foaled at Harris Farms.

Coalinga, CA (July 14, 2022) – Harris Farms is proud to offer a fifteen yearling consignment to the California Thoroughbred Breeders Association 2022 Northern California Sale to be held on Wednesday, August 17, 2022 at the Alameda County Fairgrounds in Pleasanton, California. The sale begins at Noon.

2 Bay Colt by Conquest Farenheit out of Fast Breaking News

42 Bay Filly by Smiling Tiger out of My Senses

70 Bay Colt by Tamarando out of Sioux Zen

87 Chestnut Filly by Vronsky out of Team Builder

94 Bay Colt by Om out of Tizn’t Caught

114 Chestnut Filly by Smiling Tiger out of Almost Reality

11 Unbridled Rhythm by Uptown Rythem out of Harbor Song

16 Baby Got Rhythm by Uptown Rythem out of It’sallyoursbaby

63 Artesian Flow by Stay Thirsty out of Sea Royalty

64 Thirsty Soul by Stay Thirsty out of Seoul Unbridled

102 Chestnut Filly by Smiling Tiger out of Wall St Widow

145 Bay Filly by Vronsky out of Eden Mirelle

Coalinga, CA (July 14, 2022) – Harris Farms stallions have to the California Thoroughbred Breeders Association 2022 Northern California Sale to be held on Wednesday, August 17, 2022 at the Alameda County Fairgrounds in Pleasanton, California. The sale begins at noon.

94 Bay Colt by Om out of Tizn’t Caught

70 Bay Colt by Tamarando out of Sioux Zen

Pleasanton, CA (July 8, 2022) – Smiling Tiger daughter Away From the Sun took her lifetime record to four wins in six starts with a dominant victory in the 2nd race at Pleasanton, a six furlong allowance over the fast track.

Away From the Sun dashed out of post four and quickly found some company on the lead. She shook off that rival halfway home and drew away through the stretch and won under a hand ride by nearly five lengths.

Away From the Sun races for and is trained by Blaine Wright. Bred in Kentucky by Chappel Alpine Farms, LLC, she was produced by the winning Red Bullet mare, Red Hot Bullet.

Pleasanton, CA (July 1, 2022) – Royal ‘n Rando, who was second last time out in the Snow Chief Stakes at Santa Anita, romped to a dominant win in the 5th race at Pleasanton, a mile and seventy yard allowance.

Allowed to settle, but not too far back, the 3-year-old son of California’s Leading Third Crop Sire Tamarando, made his move with a rail skimming trip around the final turn. He took the lead and race was over. He galloped away the length of the stretch to come home nearly ten lengths best in a stellar performance.

Royal ‘n Rando has had a busy 2022 and he is only getting better. In nine starts this season for owner/breeders Larry and Marianne Williams, he has five wins, two seconds and a third. Overall, he has won or placed in nine of his thirteen starts and he has earned $157,628. Trained by Steven Specht, he is out of the Grand Slam mare, Royal Grand Slam.