Arcadia, CA (April 24, 2021) – Coming off three consecutive second place finishes, Kristi’s Tiger changed tactics and it resulted in a visit to the winner’s circle to close out the card at Santa Anita.

The 4-year-old Smiling Tiger filly had been on or near the pace in her last three starts and all resulted in a second place finish. Today, she trailed the field in the six and one-half furlong turf allowance until the top of the stretch. Angled out to make her run by jockey Umberto Rispoli, she closed with an eye catching turn of foot to sweep past the leaders and win going away by a length and one-quarter.

Kristi’s Tiger has won or placed in nine of her twelve career starts and she has earned $159,000. She races for the partnership of Richard A. Bell and Clark O. Brewster and she is trained by Tom Bell. Bred in California by Premier Thoroughbreds LLC and Alan Klein, she was produced by the Indian Charlie mare, Lottawampum.

The official ribbon cutting was Wednesday October 16th, this is the first program of its kind in California. 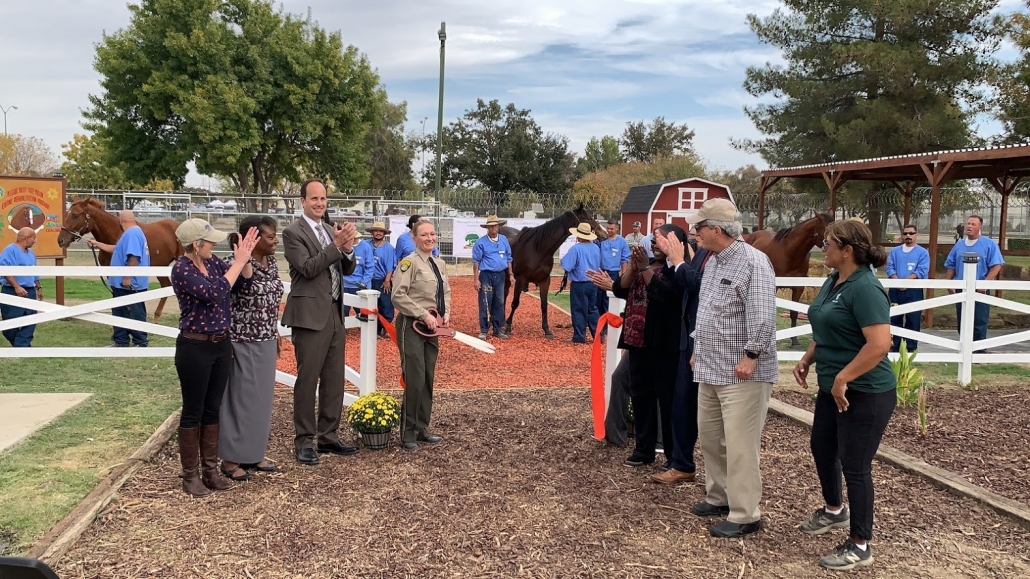 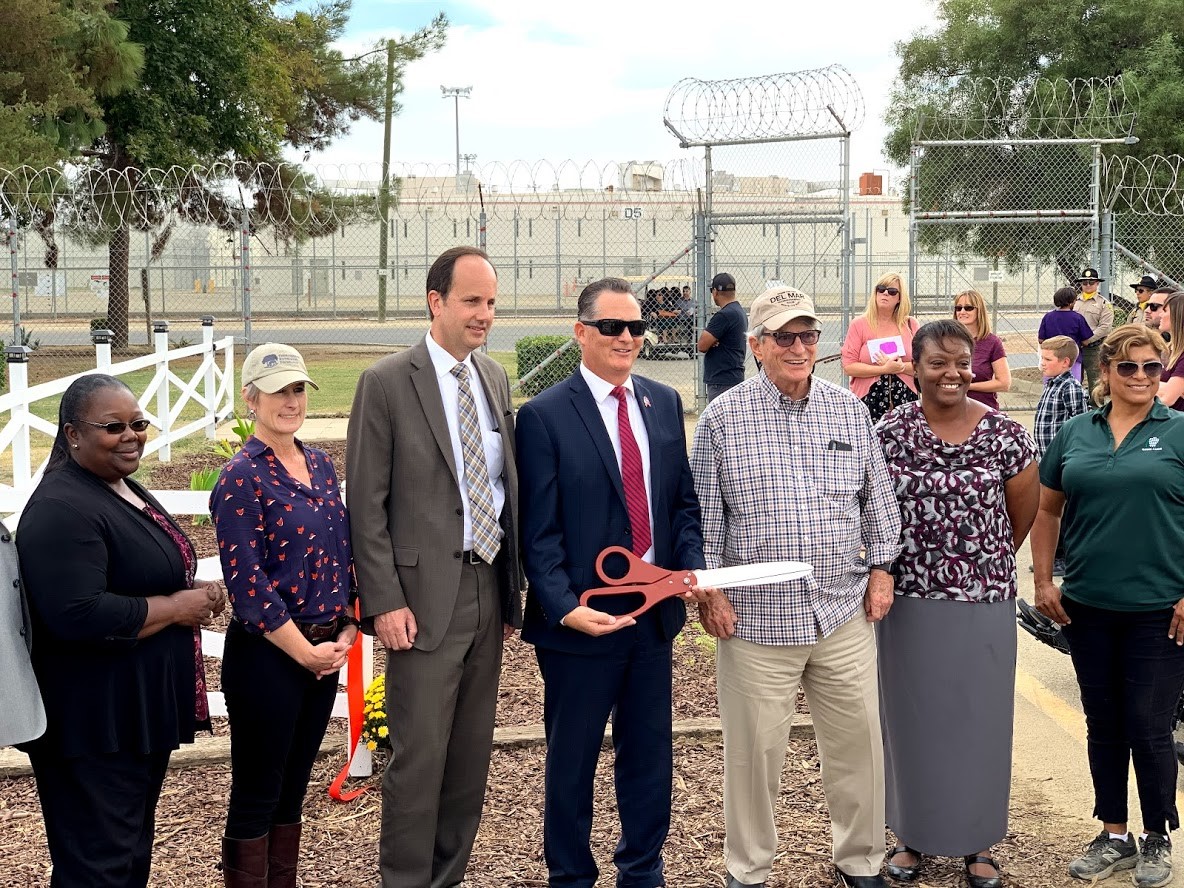 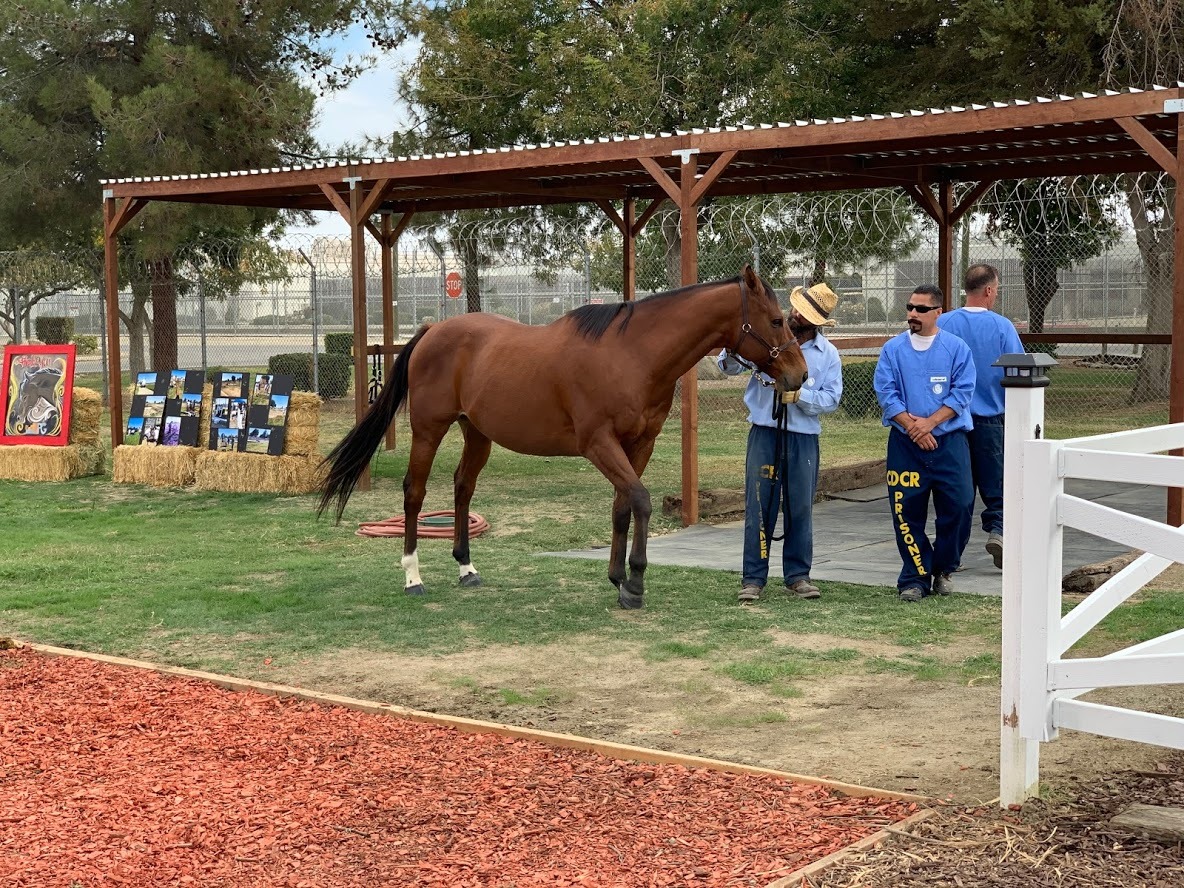 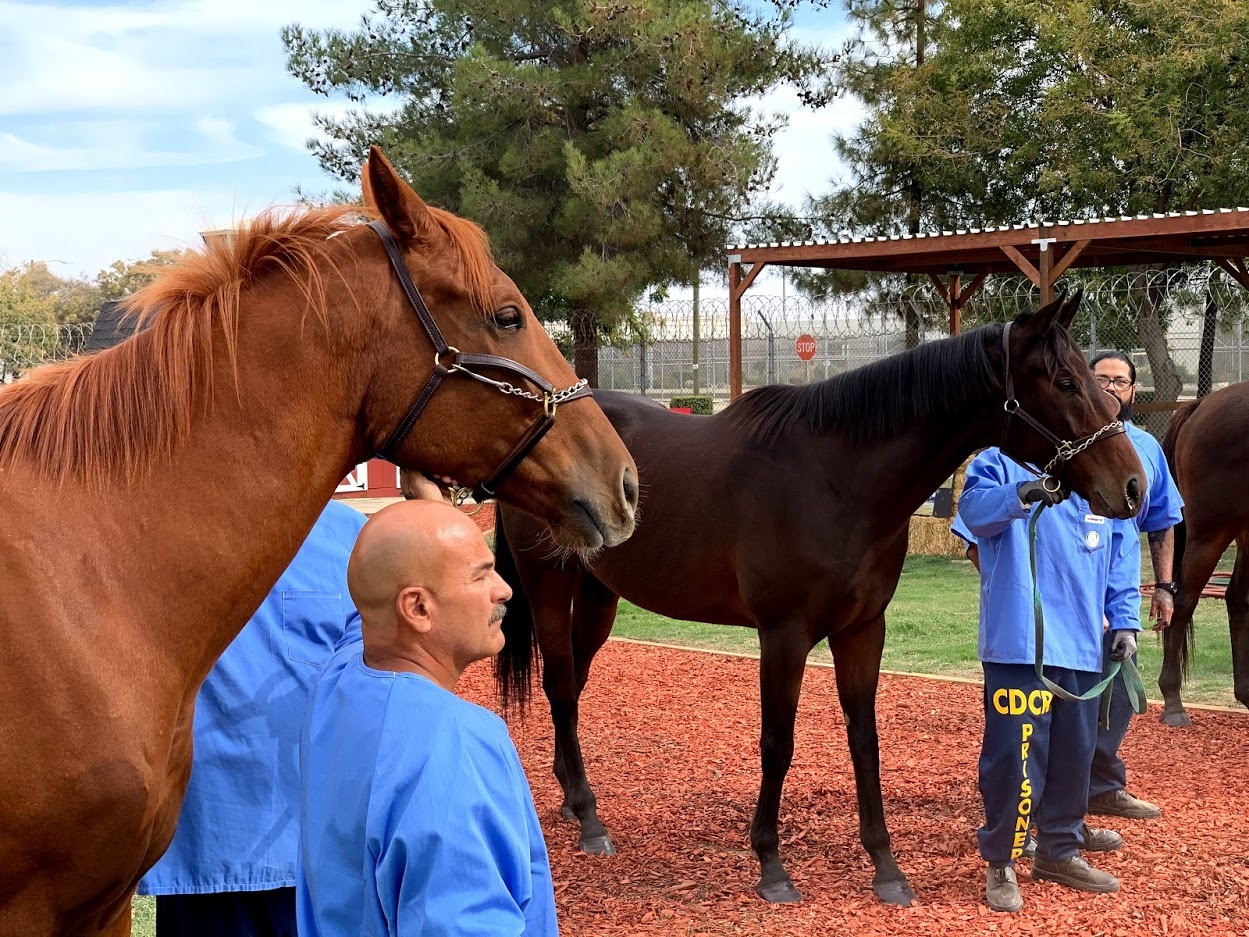 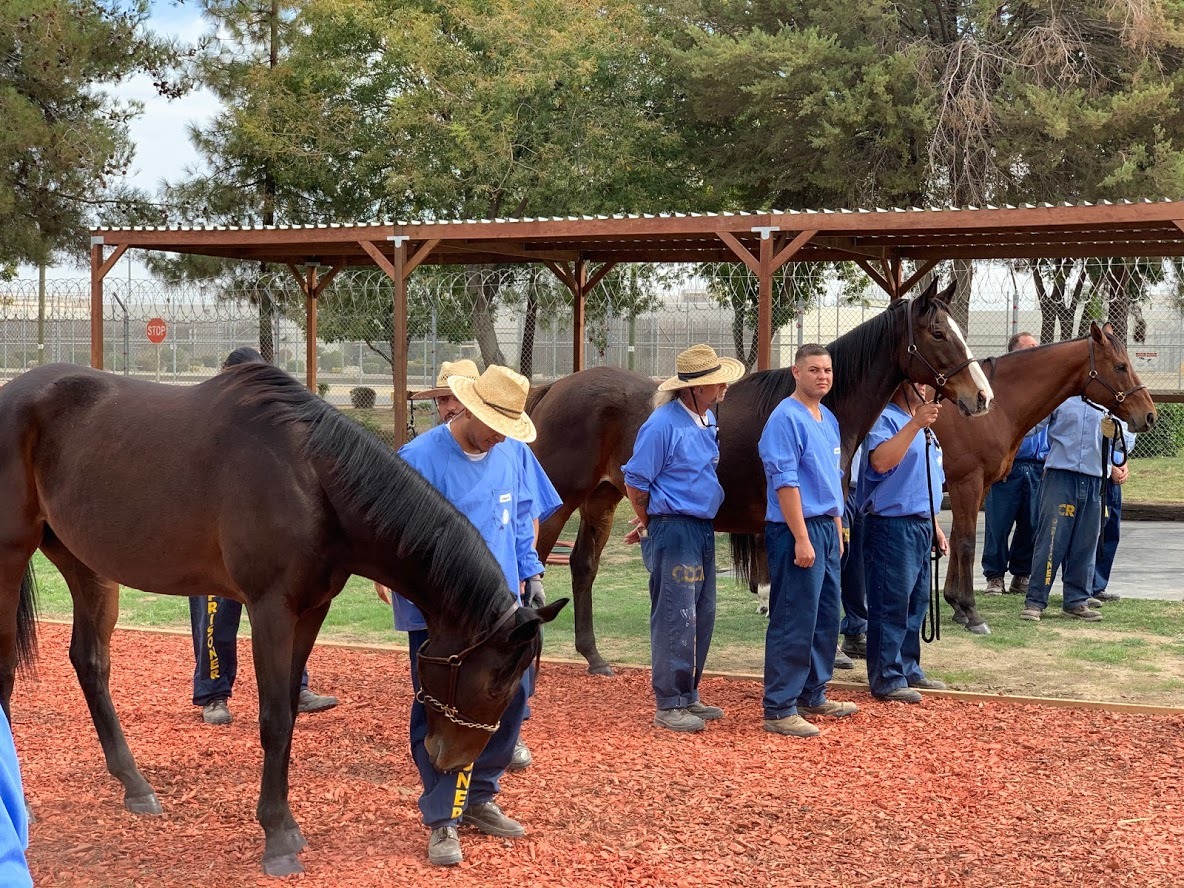 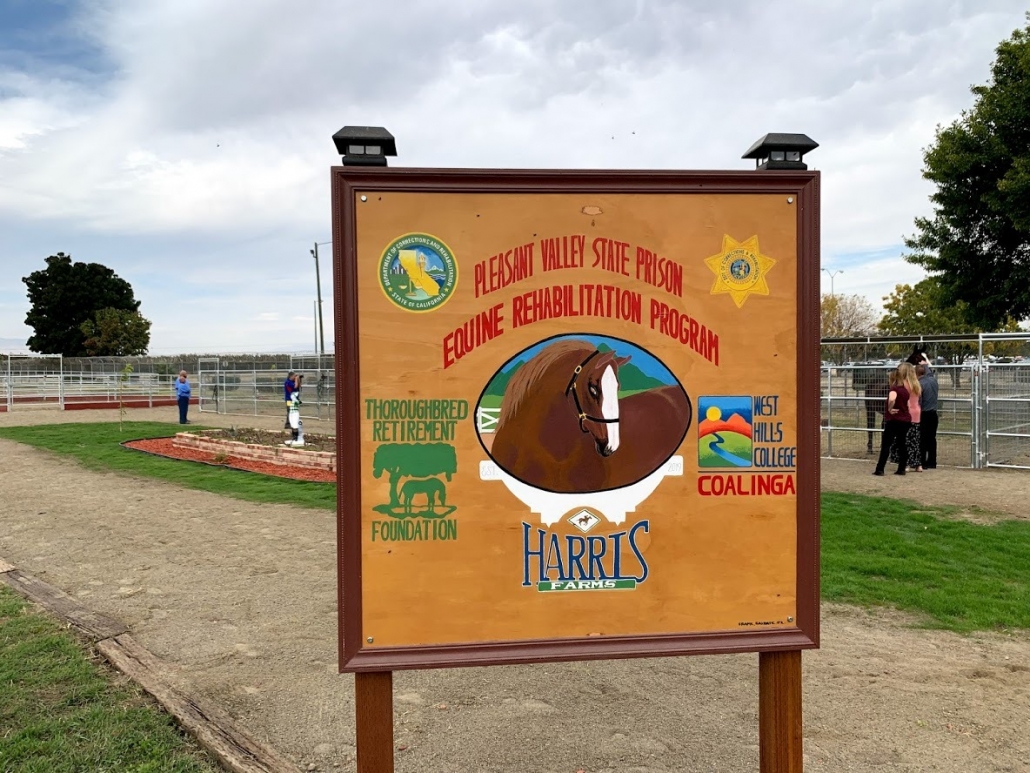 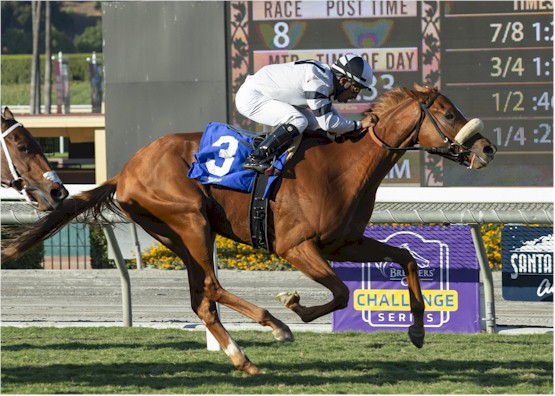 The win was the first for California-based stallion Clubhouse Ride, from his second crop to race.

The longest shot in a field of six, Warren’s Showtime rallied on the rail to win the one-mile turf race by three-quarters of a length over 7-2 Croughavouke, finishing in 1:35.06.

Croughavouke, second in the Del Mar Juvenile Fillies Turf on Sept. 2, finished a neck in front of 3-2 Mind Out, who was followed by Saavy Gal, Cholula Lips, and Yesterdayoncemore.

Saavy Gal set the pace, but could not sustain her lead in the final furlong, finishing two lengths behind the winner. Yesterdayoncemore, the 3-2 favorite who won the Del Mar Juvenile Fillies Turf, faded from third in the final half-mile.

“She was empty today,” jockey Victor Espinoza said. “She did not fire.”

Trainer Craig Lewis said a decision will be made in coming days whether Warren’s Showtime will be considered for the Breeders’ Cup Juvenile Fillies Turf here on Nov. 1 or the $200,000 Golden State Juvenile Fillies for California-breds at seven furlongs the same day.

Owned by Ben and Sally Warren, Warren’s Showtime has won 2 of 4 starts and earned $104,271. She has excelled on turf, having won a maiden special weight race for California-bred fillies on Aug. 21 before finishing a troubled eighth in the Del Mar Juvenile Fillies Turf, her stakes debut.

Lewis dismissed that result before Sunday’s race, saying Warren’s Showtime lost all chance when racing in traffic on the turn.

“She was knocked sideways going into the clubhouse turn and was five or six wide,” Lewis said. “She got outpositioned. When you get outpositioned on the turf course, you don’t win.”

Sunday, Velez had Warren’s Showtime well placed throughout leading to a milestone victory.

The 21-year-old jockey began riding in California earlier this year and was the leading rider at the Los Alamitos summer meeting and the Los Angeles County Fair meeting there last month.

ARCADIA, Calif. (Feb. 7, 2019)–Spiced Perfection is one of two finalists for the 2018 California-bred Horse of the Year, which will be announced at the California Thoroughbred Breeders Association Annual Meeting on Monday, Feb. 25.

Other championship awards for the Harris Farms stallion roster were earned by:

We have an impressive group of stallions that I think can make long term impacts on the future of California breeding. I feel it is important that you take a look at our stallions in play for this season. I want to give you an opportunity to come to Harris Farms on Saturday, January 19th to view the stallions. While pedigrees, nicks, etc. may be important, there is nothing as key as seeing a sire in person that you may be staking your mare’s future, plus your own racing and breeding successes on.

Plan on joining us on January 19th for a productive day that can shape your racing future into the next decade. We will start at noon with a video presentation of our sires and some of their progeny’s race records, which will occur over lunch at the Restaurant in the Farm Room. We will then adjourn to our stallion barn, about a 15-minute drive away, to see the 11 stallions standing here for the 2019th season. You’ll be able to assess what confirmation type you like, and how that may best blend with your broodmare. Some of our key staff members will be there to answer any questions and have information regarding the stallions.

We will then move back to our Restaurant/Inn for a hosted reception which will include some remarks on the overall California breeding industry, and a good discussion including all present.

I have made arrangements to provide a 40% discount off our normal room rates for California breeders should you wish to stay over either Friday or Saturday (the 18th or 19th). Contact the Inn directly at 559.935.0717 or via the Internet at www.harrisranch.com to make your own arrangements.

The day will also be a good chance for you to meet Jonny Hilvers, the new GM of Harris Farms.

Best wishes for a happy and winning New Year. 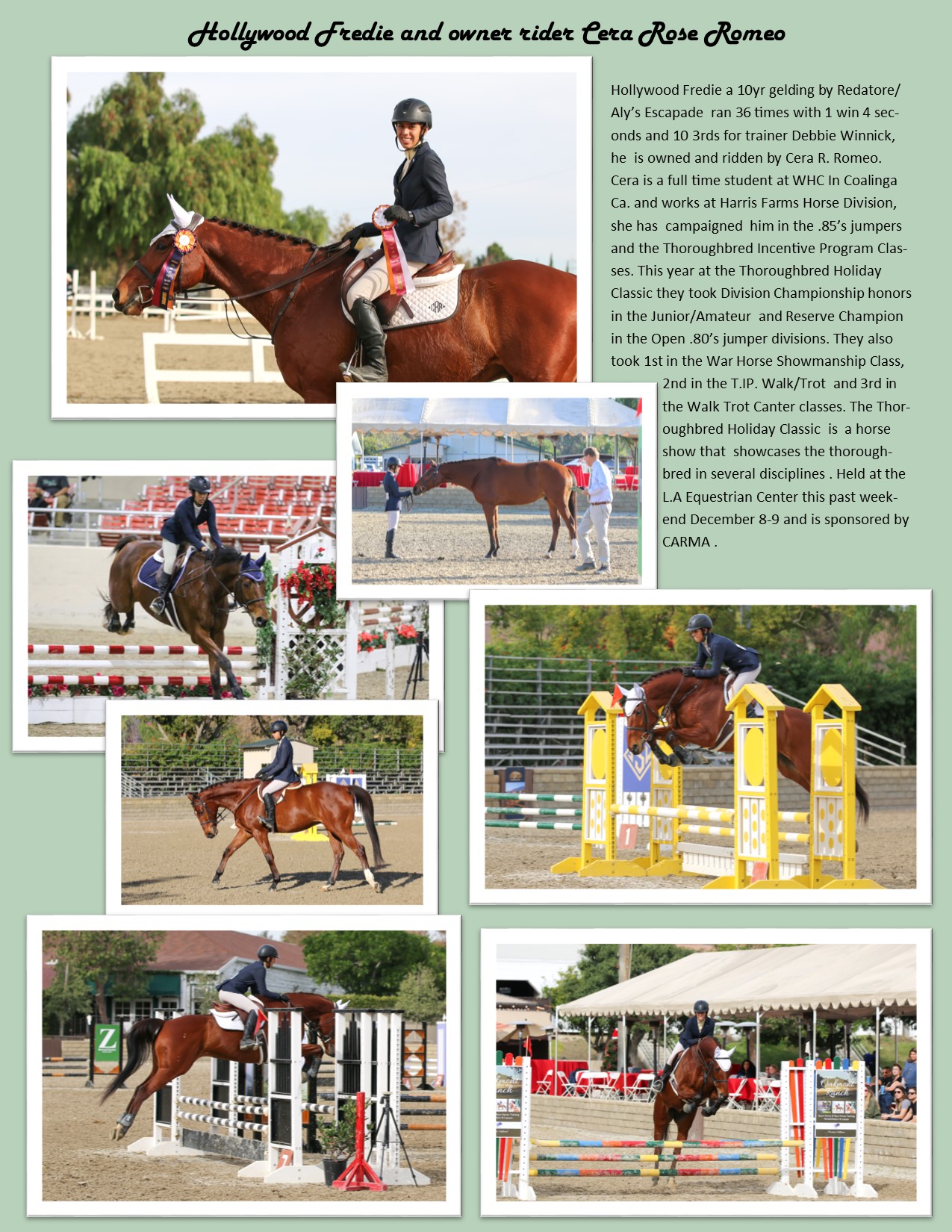 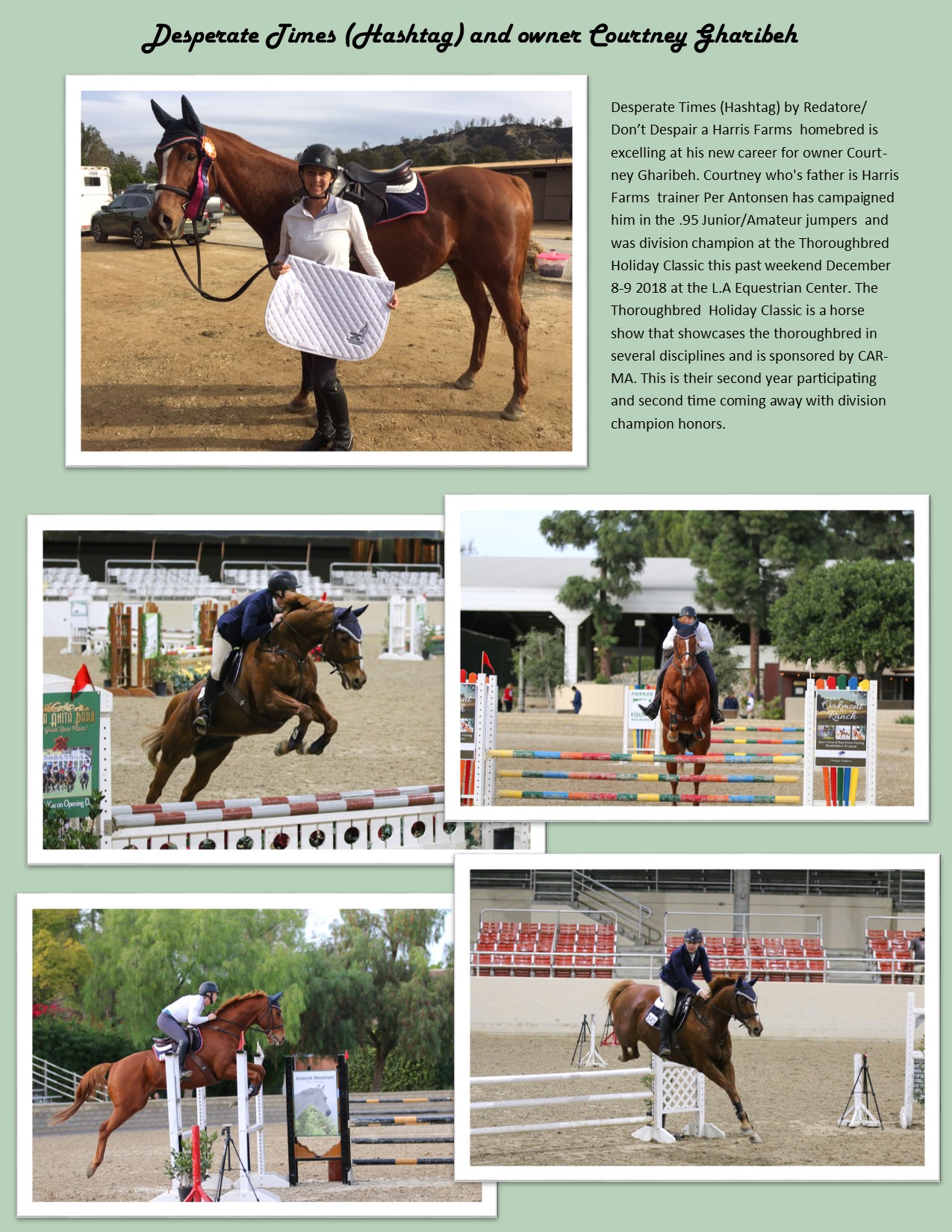 Albany, CA (December 8, 2018)-In the $63,125 first division of the Miss America, Lynne’s Legacy unleashed a strong closing kick to rally from last to first.

Winning rider Alonso Quinonez was content to sit back early on the 5-year-old daughter of Unusual Heat. She is the fiftieth stakes winner for her sire.

“That’s the way she runs races, I was going to do that no matter what. I got a perfect trip,” he said.

Lynne’s Legacy was last in the field of eight as Savannah Slew set the early pace. The front-runner was challenged and overtaken by Birdie Gold into the stretch, but the new leader was no match for the late-running Lynne’s Legacy, who split horses in the lane, defeating Fiery Lady by 1 1/2 lengths. Birdie Gold was a head behind the runner-up in third. The winning time was 1:44.08.

Lynne’s Legacy was claimed away from trainer Doug O’Neill two starts back at Santa Anita for $40,000. In her next start, on Nov. 22 at Del Mar, two of the original owners, Maureen Richardson and Steve Rothblum, joined by Ritchie Robershaw, teamed with O’Neill to claim her back for the same price. Her win Saturday was worth $39,450 to the group.

Going into the Miss America, Lynne’s Legacy had made 27 of her 28 career starts on turf, but when the race was moved to the synthetic main track, the connections decided to stay in the race.

“We knew turf horses run well on it so we decided to run,” said Leandro Mora, O’Neill’s assistant. “My only concern was it’s brown, and she might think she was running on dirt, but she’s like me, color-blind, so it didn’t matter.”

COALINGA, Calif. (Dec. 5, 2018)-Combining over 100 years of leadership and excellence in California and national racing, John Harris’s Harris Farms and the Johnston’s family’s Old English Rancho are joining forces to keep California racing and breeding strong. Stallions now will all be located at the Harris Farms facility near I-5 about midway between the Bay Area and the Los Angeles area include: Acclamation, Clubhouse Ride, Desert Code, Jeranimo, Lakerville, Majestic Harbor, Mr. Big, Prospect Park, Smiling Tiger, Tamarando, and Vronsky. Both farms utilize over 700 irrigated acres or irrigated pasture for boarding of broodmares as well as stallions, and the development of yearlings.

Jonny Hilvers, the general manager of Old English Rancho for 8 years will become General Manager of the newly combined entity. Hilvers, 33, a Sanger native is the grandson of popular California owner and breeder, Buddy Johnston and great-grandson of Elwood “The Pie Man” Johnston, the founder of Old English Rancho, a dominant force in California racing and breeding for decades.

Harris Farms owner John Harris, a 1965 graduate of the University of California at Davis is a farmer, a cattleman, a beef processor, a restaurateur, and an enthusiastic owner and breeder of thoroughbreds in California for over 50 years. He has been a member of The Jockey Club since 1984, still serves on the California Thoroughbred Breeders Association Board and is a former Chairman. He was inducted into the Thoroughbred Hall of Fame in 2008. He is also a prominent owner and breeder, having bred numerous California Champions and Grade One Stakes winners Alphabet Kisses and Cost of Freedom. Although breeding predominantly to race, he has sold several sales toppers in recent California yearling and 2-year-old sales. Harris was Chairman of Bay Meadows Racing Association in the mid-1990s.

Dave McGlothlin, who started managing Harris breeding stock in 1981, will remain as a consultant.

Per Antonsen, farm trainer for many years will continue in that role. At Harris, he was key in the early training of Champions Tiznow and California Chrome, and many other California champions.

Raul Rosas, a 30 plus year horseman who has handled all the top Harris stallions remains at Harris as stallion manager.

Dr. Jeanne Bowers Lepore, a graduate of the Veterinary School of the University of California at Davis has been a well-respected veterinarian for many years, and has overseen Harris Farms equine health since 1997. She is assisted by her associate Dr. Virginia Hernandez, as well as newly arrived Kristen Phillips and Ana Celdran.

Debbie Sue Winick will remain as Office Manager and Customer Relations specialist. Debbie is a former Paymaster of Purses at Bay Meadows and was an Executive Assistant at California Thoroughbred Breeders Association. Laurie Brown, a key player for Harris for the last several years, manages the River Ranch operation near Sanger, assisted by Lindsay Miller. Patricia Langden is foaling manager and assists with sales preps, as well as overall equine health issues.

John Harris commented, “I feel incredibly blessed to have such a fine group of people come together with the common goal of producing thoroughbreds that can compete at the very top levels. Now that the drought is behind us, and by adding additional pastures, we can give horses more room and expansive grass pastures to grow up on, while still having many smaller sized paddocks as options for various needs. I want to have the best facility, the best nutritional and health programs, the best people, and the most promising stallion roster in California. We want to be valued as a place to raise top horses. Jonny Hilvers will be a key ingredient to all of the mutual success I envision. He brings us solid leadership and practical excellence, and represents a new generation to help lead California forward”.