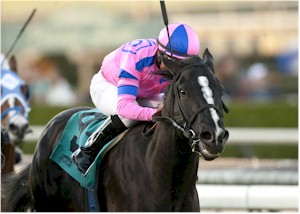 By Santa Anita Publicity
ARCADIA, Calif. (Dec. 28, 2014) – Trainer Peter Eurton’s red-hot Bettys Bambino made his stakes debut a successful one on Sunday at Santa Anita, as the 4-year-old California-bred gelding by Unusual Heat took the Grade III, $100,000 Daytona Stakes by a half length under Martin Garcia, negotiating 6 ½ furlongs down the hillside turf course in 1:12.49.

In winning his third consecutive race down Santa Anita’s unique Camino Real turf course, Bettys Bambino was ridden confidently by Garcia, who broke from post position seven and was fifth in a field of nine crossing the dirt at the top of the stretch.

“He loves this course and who knows, he might like a mile, but we never really had the opportunity,” said Eurton. “But he does love the downhill and I don’t think we’ll ever change that…We’re just kind of going to enjoy this one right now and see what comes up at a later date.”

The second choice at 3-1, Bettys Bambino paid $8.00, $4.00 and $3.00. Bred and owned by Sharon Alesia, Bran Jam Stable and Joseph Ciaglia, Bettys Bambino got his fourth win from five tries down the hill and his fifth overall win from nine lifetime starts. With the winner’s share of $60,000, he improved his earnings to $258,036.

For his part, Garcia played the Daytona in considerable pain.

“My horse hit me in the head and then he hit me in the right knee too against the (starting) gate,” said Garcia. “He was leaning on my knee that was in between him and the gate. In the moment, the win was just exciting with the adrenaline. Now…I just need to go to the doctor to get checked out.”

Ridden by Rafael Bejarano, Lil Bit O’Fun tracked the winner crossing the dirt and proved second best, finishing 1 ½ lengths in front of favored Sweet Swap. Off at 4-1, he paid $5.20 and $3.20.

The solid favorite at 6-5, Sweet Swap broke from the rail and made the lead a furlong out after laying close to the pace, but tired late to finish third under Corey Nakatani. A four-time winner over the course, he paid $2.40 to show.

“I was in a garden spot,” said Nakatani. “I thought I had a ton of horse and I just got out-kicked today.”