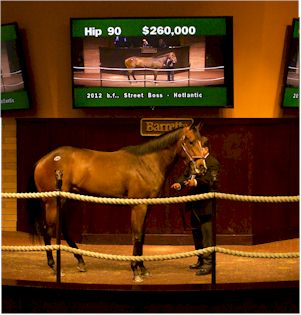 By Joe Nevills DRF.com
POMONA, CA (May 13, 2014)- Leading the May Barretts sale was Long Hot Summer, a Street Boss filly who sold for $260,000 to recently retired trainer Mike Mitchell, as agent.

Bred in California by Harris Farms and Donald Valpredo, Long Hot Summer is the first foal out of the multiple stakes-winning Stormy Atlantic mare Hotlantic, and is from the family of stakes winners Special Power and So Cozy. Monday was the first time the filly had sold at public auction. 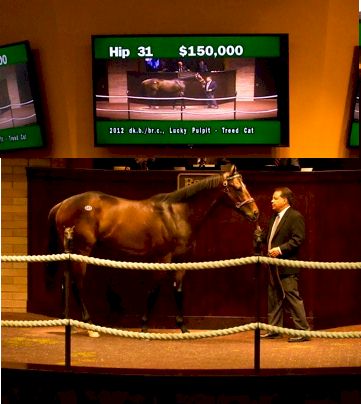 A son of newly minted Kentucky Derby sire Lucky Pulpit was bought for $150,000 by trainer Peter Miller, as agent, for the sale’s second-highest price. Named Lucky Logan, the colt breezed two furlongs in 21 2/5 seconds during the under-tack show. The California-bred sold for $37,000 as a yearling during the Barretts October sale last fall, and was consigned on Monday by Ciaran Dunne’s Wavertree Stables, as agent. He is out of the unraced Tale of the Cat mare Treed Cat and is from the family of Grade 1 Arlington Million winner Golden Pheasant.