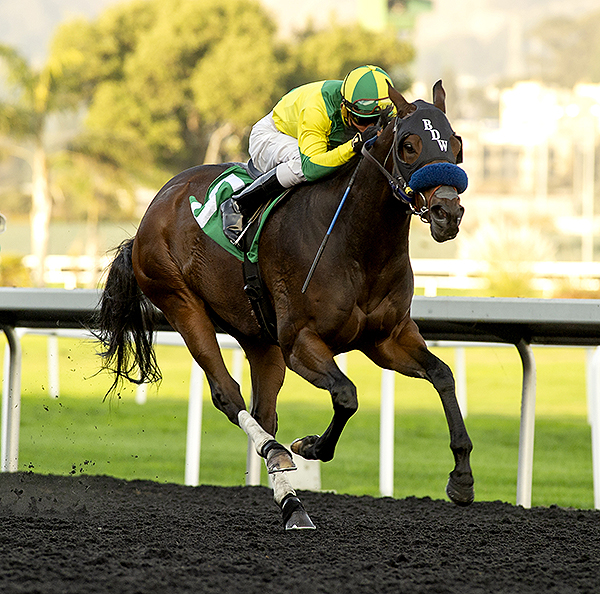 Courtesy of DRF.com Albany, CA (Nov. 1, 2020) — Odds-on favorite Baja Sur is now a perfect 2 for 2 over the Golden Gate Fields main track after dominating his rivals with a four-length victory in the $75,000 El Dorado Shooter for California-bred or sired on Sunday.

The 4-year-old Smiling Tiger gelding won the Oakland by 4 1/4 lengths against older last fall, earning a 100 Beyer as he clocked six furlongs in 1:08.68. Sunday’s victory was by four lengths over pacesetting Bettor Trip Nick in 1:08.76.

Baja Sur was bred by John Roche out of the Supremo mare Premo Copy.

With a lot of speed in the compact five-horse field, trainer Blaine Wright didn’t have detailed instructions for winning jockey Catalino Martinez.

“He knows the horse, and I just told him to ride him with confidence and just don’t leave himself with a lot to do,” Wright said. “Kudos to Catalino. He came up with a good game plan.”

Bettor Trip Nick, who scored two front-running wins here as a 2-year-old last year, grabbed the lead out of the gate with sizzling fractions of 21.68 and 44.06 while making his first start since June 13 and meeting older for the first time.

Baja Sur, who drew the outside No. 5 post, got away nicely, but Martinez didn’t rush him and was last after the opening quarter. He began to edge up on the turn and exploded at the top of the stretch, pulling away easily for his first win in four starts this year.

“Sometimes it’s been a little frustrating because he’s been unlucky this year,” Wright said. “It’s nice getting a win. I was probably riding harder down the stretch than Catalino.”

The Oakland will be run here on Nov. 21, but Wright said he’d wait to make a decision about that race.

“He’s gotta pull up good and not be too tired,” Wright said. “If we do run him, it will be his last race of the year.”

Owned by John and Janene Maryanski and Gerald Schenider, Baja Sur earned $45,000 for his sixth victory in 12 starts, lifting his career earnings to $227,520.