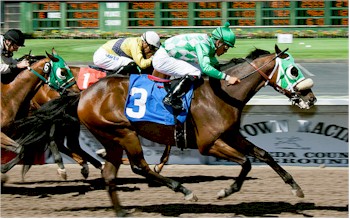 The win-fest began at Pleasanton on Saturday in the sixth race when Harris homebred Luck Lasts contested the early pace and outlasted his rival to take a $33,408 five-furlong maiden special as the 5-2 second choice by a half-length in his second start. He is the first foal from his dam, Glory Forever (In Excess), a winning half-sister to the June 15 Hollywood Park maiden special debut winner Glorious Luck, also a Harris homebred by Lucky J. H.

The Saturday afternoon hot streak continued for Lucky J. H. at Hollywood Park when Alpine Luck broke on top and led throughout to win a $62,422 maiden special as the 5-2 favorite by 1½ lengths defeating a field which included sons of Tapit and Into Mischief. 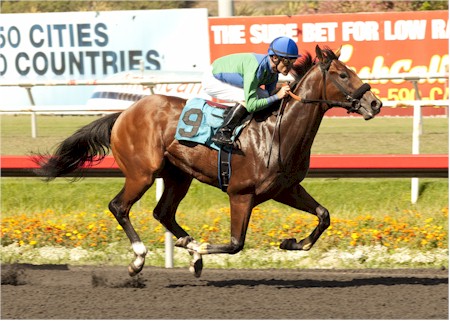 He ran the five furlongs in 58.52 and clocked the final eighth in 12:19 under a hand ride. Bred by owner Heinz Steinmann, Alpine Luck is out of the $165,233 earning Swiss Yodeler mare I Can Yodele.

Already the sire of current G2 winner, Tiz Flirtatious, the leading 2013 Cal-bred earner on turf, Tizbud and owner/breeder Pam Ziebarth may have another potential headliner with 3-year-old Ambitious Brew. 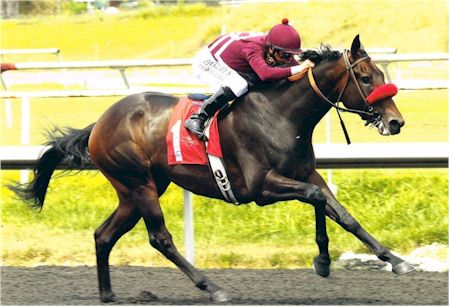 A fast-closing second in his May 10 debut on turf, Ambitious Brew was sent off as the 3-5 favorite in Sunday’s $52,750 maiden special at 6½ furlongs on the main track. Steadied at the start to avoid clipping heels, Ambitious Brew moved quickly through horses to set the initial 22.42 fraction, continued the battle on the lead entering the stretch then drew clear to win by just over three lengths.

A full brother to allowance winner Tiz a Bud Girl, Ambitious Brew is the third foal from the Forest Wildcat daughter Kathwen.