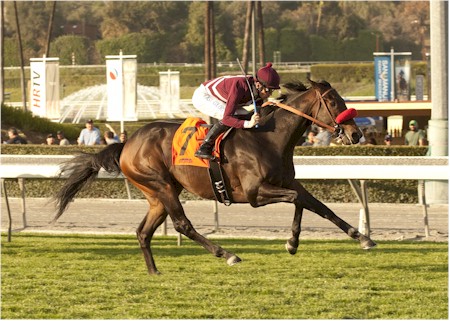 The 4-5 favorite in a field of six older horses bred in California, Lakerville, ridden by Gary Stevens, finished second, a half length in front of Summer Hit and Rafael Bejarano.

A 4-year-old Tizbud gelding trained by Marty Jones, Ambitious Brew sat third early, stalking pacesetting longshot Coach Bob and Summer Hit through fractions of 22.00, 44.22 and 1:06.28 and hit the front three-wide a furlong out.

“Mike (Smith, regular rider) was out of town today and I worked him the other morning,” said Blanc. “…I talked to Mike a little about the horse, I watched the replays and it seemed pretty straight forward. He has plenty of tactical speed and this race looked like it had a few speed horses in it. My plan was to track and Marty told me he has a really nice turn of foot. He told me not to worry and that when it was time to go, he would go for me, which he did.”

“I don’t think he could have been any more impressive in my eyes, the way he ran,” said Jones. “He’s 110 percent race horse. I think he will go further. It might be time to try it. I was going to walk down there (to the Racing Office) and nominate him to the Kilroe (Grade I, $350,000 mile turf on March 8) if he cools out all right. We’ll keep all our options open.”

Lakerville, who came off an authoritative win down the hill in the Clockers’ Corner Stakes Jan. 26, sat fifth down the hill, swung wide turning for home and appeared to have dead aim on the winner but was outrun through the drive, finishing second, a half length in front of Summer Hit.

“I left him too much to do,” said Stevens. “They weren’t going that fast for those kind of horses. Brice got the jump on me and we couldn’t overcome it. I just kinda tactically beat myself.”

Summer Hit, the actual third choice at 3-1 with Rafael Bejarano, sat a close second throughout and couldn’t hold off Lakerville for the place. He finished 4 ½ lengths in front of Coach Bob and paid $2.40 to show.