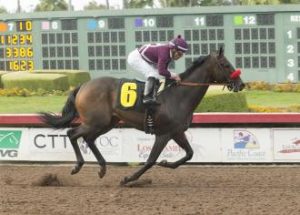 By Steve Andersen
CYPRESS, Calif. – The cancelled Lennyfrommalibu Stakes at Santa Anita on July 4 is becoming a key race.

The Lennyfrommalibu Stakes was scheduled for the hillside turf course, but was not used when the race failed to draw enough entries to satisfy track officials. Pee Wee Reese was intended for the Lennyfrommalibu, but started in the Grade 3 American Stakes on July 4 and won his first graded stakes.

The same scenario led Ambitious Brew to the winner’s circle of Saturday’s $100,690 Bertrando Stakes at Los Alamitos. He was also meant for the Lennyfrommalibu and started in the Bertrando Stakes for California-bred milers as a substitute.

“I was disappointed when that race didn’t go,” trainer Marty Jones said. “Sometimes, things work out for a reason. I think Pee Wee Reese would have been tough to beat.”

Ambitious Brew won his second stakes of the year in the Bertrando against six rivals.

Ridden by Norberto Arroyo Jr, Ambitious Brew ($10.60) closed from third with a three-wide rally on turn to take a commanding lead in early stretch.

Arroyo rode with confidence. He peeked over his shoulder as Ambitious Brew took the lead to check the status of 7-5 favorite Soi Phet.

“I saw what I wanted to see,” Arroyo said. Soi Phet “was inside of horses. After that I was waiting as long as I could. If I saw (Soi Phet), I’d have to move earlier than I wanted. It worked out perfect.”

“At the top of the stretch, I knew we were in business,” Jones said.

The Bertrando Stakes was Ambitious Brew’s sixth stakes win for owner and breeder Pam Ziebarth. A 7-year-old gelding by Tizbud, Ambitious Brew has won 9 of 25 starts and $669,425.