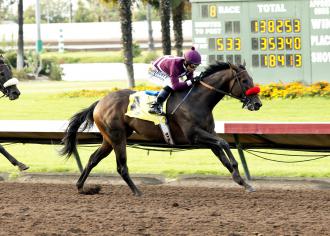 By Brad Free
LOS ALAMITOS, Calif. – Some doubted the two-turn ability of sprinter Ambitious Brew prior to the $75,000 E.B. Johnston Stakes on Saturday at Los Alamitos.

Ambitious Brew erased those doubts with a sharp 1 3/4-length victory in the mile race for Cal-breds. Bet from third choice to favoritism, Ambitious Brew ($5) and jockey Mike Smith pressed the pace two-wide, took over on the far turn, and won in a sharp 1:34.29.

Program favorite Motown Men has tailed off; he finished eight lengths behind the winner in fourth.

The win was the fifth in 14 starts for Ambitious Brew, trained by Marty Jones and owned by breeder Pamela Ziebarth. A 5-year-old gelding by Tizbud, Ambitious Brew has earned $338,130.

The first 10 starts by Ambitious Brew were sprints, but Jones always believed the gelding was more than just a sprinter. It turns out Jones was right. The two-turn win opens up long-distance possibilities for Ambitious Brew, who could still show up in a sprint.

The next stakes for California-bred colts and geldings on the circuit is the California Flag on the Santa Anita downhill turf course Oct.12.