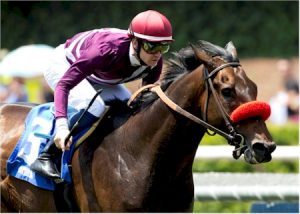 By Jay Privman
ARCADIA, Calif. – Ambitious Brew returned from a seven-month layoff to score a front-running victory on Saturday at Santa Anita in the $100,000 Lennyfromalibu Stakes, a win trainer Marty Jones hopes is a preview of coming attractions.

“In some ways I feel I haven’t gotten as much out of him as I should,” Jones said after the first of the five stakes on Saturday’s Gold Rush card for California-breds. “He’s a super horse. Hopefully there’s one more chapter.”

The book so far on Ambitious Brew isn’t bad at all. He has won 6 of 16 starts, and the $60,000 he made Saturday pushed his career earnings to just shy of $400,000 for his owner and breeder, Pam Ziebarth. But Jones has always felt Ambitious Brew had the potential to be major player in turf sprints in open company. In the fall of 2014, he just missed in the Grade 3 Eddie D. before he finished seventh in the Breeders’ Cup Sprint, beaten just three lengths.

Last fall, Ambitious Brew had to be turned out following a poor try in the California Flag. He was sent to Harris Farm “for a couple of months,” Jones said, “and they did a good job getting him fat and happy.”

In the Lennyfromalibu, run at 6 1/2 furlongs down the hillside turf course, Ambitious Brew ($6.40) sped to the front, got away with soft fractions of 22.88 seconds for the opening quarter-mile and 45.82 for a half, then was never threatened while cruising to a  2 1/4-length victory over Forest Chatter, the 3-5 favorite.

“You could tell he was going to be tough a quarter-mile into the race,” Jones said.

Ambitious Brew, ridden by Flavien Prat, was timed in 1:13.78 on the firm course.

Old Man Lake was another 1 1/2 lengths back in third and was followed, in order, by Pay the Fine and K Thirty Eight in the field of five.

Ambitious Brew, 6, is a gelding by Tizbud.