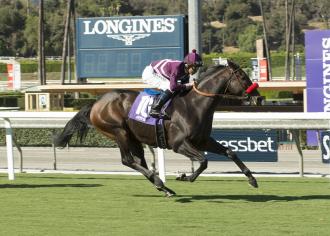 By Steve Andersen
ARCADIA, Calif. – Two years ago, Ambitious Brew (Tizbud) finished second by a nose in the Grade 3 Eddie D Stakes on the hillside turf course at Santa Anita. In Friday’s sixth race, the 6-year-old gelding finally won his first graded stakes in the first division of the $101,725 Eddie D Stakes.

Ridden by Mike Smith, Ambitious Brew was always well placed and dueled with Richard’s Boy through the stretch before gaining an advantage. Ambitious Brew was fourth on the hillside and was third when the field crossed onto the main turf course.

“He gave him such a good trip,” Jones said of Smith. “He was able to break and get comfortable.”

“He’s such a good horse,” Jones said. “I’m embarrassed that this is his first win in a graded stakes.”