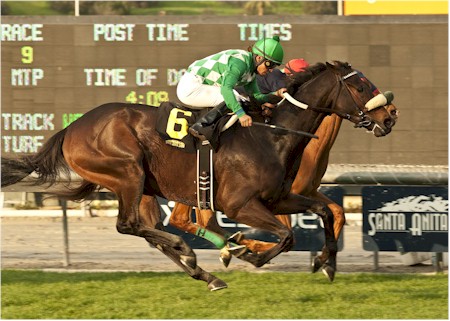 John Scott is by Bertrando, out of the Deputy Minister mare Henlopen, was bred by Harris Farms and Scott Gross, is owned by Harris Farms, trained by Carla Gaines and was ridden by Martin Garcia. He’s a half-brother to Distant Victory, winner of the 2008 California Cup Distance Stakes.

“I thought he got beat,” said Harris. “He’s out of mare we bought years ago and we’ve done very well with.”

JOHN HARRIS (OWNER/BREEDER), JOHN SCOTT, WINNER: “He’s so versatile. You never know. You think you run out of aces on these old horses that come back and they just keep doing it and he did.

“It’s pretty amazing. It’s hard to bring a horse back from a bow. You have patience. We did a lot of things, took a lot of time and it all came together. He really shouldn’t have been a favorite. He’s never been on turf, he’s never been a mile and an eighth, he had a lot going against him.

“But he had a consistent form. He ran fourth in the Breeders’ Cup Dirt Mile. We didn’t know how this day would play out, but it worked well.”

(Does he now consider the Santa Anita Handicap?): “I don’t know. That’s a tough bunch of handicap horses around. It’s in the realm of possibilities, but I think we just soldier on.

(About the thrill of winning this race and if this ever gets old): “No, it doesn’t. Especially a horse you’ve bred, you’ve stopped on, you’ve brought back, and you’ve had ups and downs. A lot of things have happened. When you win one like this, it’s definitely exhilarating.”